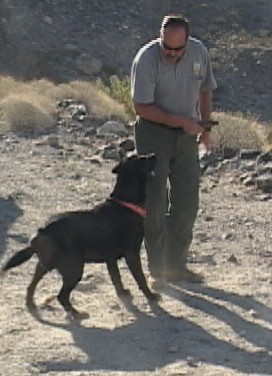 KSRW has published and aired a series of stories on efforts to determine if the Charles Manson family killed and buried more victims than suspected at their Death Valley home. Over the past week-end, major media exploded with the same news and scientists now say they believe someone should dig in several sites to check for human remains.

Mammoth Police Sergeant Paul Dostie is a veritable celebrity, appearing on Geraldo Rivera, CNN and soon Good Morning America with his efforts to zero in on what the Family really did do out there in the desert in the 60s and 70s. Dostie, Sheriff Bill Lutze and others appeared via telephone on the Nancy Grace show on CNN Monday evening.

Since last spring, off-duty Sgt. Dostie has been training his dog, Buster, to find bodies long buried in hidden gravesites at the Manson family home, Barker Ranch in Death Valley. Evidence from some dogs confirms the possible gravesites that Buster has found, other dog teams were not so certain.

While there may not yet be enough evidence to start the forensic excavation of possible graves, the sandy washes of that desert ranch above Panamint Valley have become a testing ground for both Dosties dog Buster and Arpad Vass, a scientist with the Oakridge National Laboratory working to perfect a machine that mimics a dogs nose in its detection abilities.

Recently Dr. Vass and Sgt. Dostie were back out at the Barker Ranch testing the sniffing machine on the sites found by Dosties dog Buster. Dr. Vass has built a machine that someday may be a cheaper alternative than cadaver dogs used by law enforcement to find buried bodies.

The sniffing machine looks like a cross between a video camera and a vacuum cleaner and is designed to detect the unique chemical composition given off by a decaying human body. After the scientists soften up the dirt with a probe, Vass puts the purple nozzle a few inches into the dirt over one of the sites that Buster located. The nozzle is attached to the machine by a hose, essentially making a long snout.

Dostie explained that Dr. Vasss machine can pick up decaying body compounds in the parts per million, while a dogs nose can pick up parts per billion.

Inyo County Sheriff Bill Lutze says that his department received Dr. Vasss report and findings at the end of last week. Lutze reports that his staff is currently putting the pieces of the puzzle together to determine what is there. The details of the report from the Oakridge National Laboratory are law enforcement sensitive and Lutze says that he cant go into specifics until the documents are reviewed.

After working the machine on the sites identified by Buster, Dr. Vass has recommended digging at three of those sites, Dostie reports.

Meanwhile national news media interest in the story has picked up. With the possibility of additional victims, it seems that the crimes that shocked the nation during the Nixon years still qualify as unfinished business.

We work to provide daily news to all of the Eastern Sierra, in the tradition of Eastern Sierra News Service and the Sierra Wave. We bring you daily happenings, local politics, crime, government dealings and fun stuff. Please contact us.
View all posts by News Staff →
Suspected Burglar Arrested in Mammoth
Wind Whips Up Last Areas of Dust