Mono Narcotics agents revealed this week that they spent three months on investigations that ended with a dozen arrests. 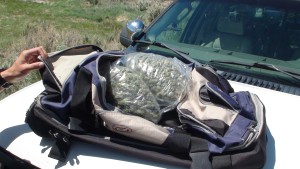 They also revealed that agents have been dealing with what they described as an epidemic of adults, you and old, abusing oxycontin. We reported earlier that agents arrested seven people in connection with oxycontin or heroin charges. Further investigations resulted in methamphetamine and marijuana arrests.

As the result of another separate investigation, MONET agents served 3 search warrants and arrested 5 Mammoth Lakes residents. A total of over 4 pounds of processed marijuana was recovered along with 35 mature marijuana plants, officials report.

Tyson Theriault, 35, was arrested for alleged possession of over 2 pounds of marijuana and over 7 ounces of Psilocybin Mushrooms. Theriault is currently on probation in Mono County on a previous MONET narcotics case.

Kyler Endersen, 25, was arrested for alleged sales of marijuana and possession of Psilocybin Mushrooms.

Aaron Derue, 27, was arrested for alleged possession of marijuana for sale.

We work to provide daily news to all of the Eastern Sierra, in the tradition of Eastern Sierra News Service and the Sierra Wave. We bring you daily happenings, local politics, crime, government dealings and fun stuff. Please contact us.
View all posts by News Staff →
State Budget Cuts Hurt Child Care Support
Hantavirus Case Confirmed in Mammoth Lakes