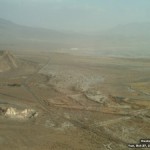 “There just isn’t any water,” Inyo County Water Department Director Bob Harrington told the Board of Supervisors at its April 21 meeting. Estimated run-off is at 36 percent of normal and that’s predicated on “normal’ precipitation for the rest of the run-off year. “Normal” has become a distant dream.

Normal for area ranchers who depend on the water allotments for pasture grass is 40,000 acre-feet; this irrigation season, that number drops to 16,500 acre-feet. According to Harrington, the Haiwee Reservoir in southern Inyo County will receive no water until at least November. “That means no water will be leaving the valley,” he said.

What little is available has to be divided among the long list of Los Angeles Department of Water and Power’s obligations, including enhancement mitigation projects and dust mitigation on Owens Lake, which accounts for half of the available water. “This opens new areas of discussion,” Harrington said in a phone interview. “People have to start cooperating. Everybody needs to take a hit.”

It sounds simple, but weighing the value of residential ponds In West Bishop against ranching operations’ need to feed their dwindling herds against Southern Inyo residents’ need to not be exposed to dust off the Dry Lake, will be a difficult conversation.

According to Harrington, that discussion will begin at the next Board of Supervisors’ meeting, April 28.

Water reductions on the Owens Dry Lake will not solve the problem, but will help. The January agreement between the Great Basin Unified Air Pollution Control District and LADWP will reduce the lake’s water use by half, but not this year. The really good news is the agreement has not cast the required amount of water in stone. “We don’t require any water on the lake,” said Air Pollution Control Officer Phillip Kiddoo. The agreement just requires no dust.

The transition from shallow flooding to a variety of best available control methods will be gradual. The most immediate water savings is on sections that have been dried out in preparation for tillage, according to Kiddoo.  The water savings from tillage this year measures in at 8,700 acre-feet.

Other dust control measures being tested include engineered roughness elements that will break up the landscape, brine that creates a crust over the loose soil and dynamic water management. Kiddoo explained an example of the latter as reducing water usage during the relatively calm fall months, then increasing water for dust control during the traditionally windy spring months.

According to Kiddoo, shallow flooding was the cheapest and quickest way to control dust off the Dry Lake at the outset. “Now that it’s under control, we can go back and do it better,” he said.

Great Basin APCD may not require any water on the lake, but State Lands – which is the owner of the lake in trust for all of the people of California sure do: water is the only dust mitigation measure that both establishes and protects ‘trust vales’ that the State,… Read more »

Attention!!! Inyo County wages out of control
take a look at the salaries of of our public servants

These folks our overworked and underpaid (lol)

if you look on line at DWP stuff, both aqueducts have been empty most of April. Haiwee reservoirs are very full.

Come on Inyo and Mono counties, Do your part . So. Cal needs to fill it’s pools. “After two years of analyzing data from space, they came up with a number: 43,123 pools in the L.A. Basin roughly from San Pedro to the Hollywood Hills and Malibu to Alhambra, without… Read more »

…Wait a minute….Are they trying to tell us NO WATER from up here will be going to So Cal untill November ????….HaHaHaHaHaHaHa !!!!!!