By News Staff on August 12, 2015 in Government Agencies/Utilities
By Deb Murphy
Both pros and cons of the proposed 15-home Kingston Subdivision on the 2.75-acre Bishop Nursery site were presented at the public hearing held at Monday’s Bishop City Council meeting. The pros concentrated on Bishop’s need for additional housing; the cons, on what they defined as a flawed Draft Mitigated Negative Declaration. Both sides will have to wait up to two months for the outcome. 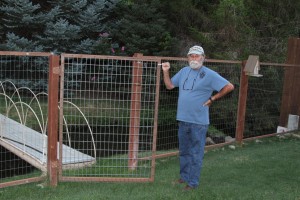 Prior to the opening of public comment, City Planning Director Gary Schley introduced Bill Taylor who will be working with the City on the environmental review. Taylor has a planning background in Mammoth. Following the comment period, City Administrator Jim Tatum explained that the final environmental document would take from six to eight weeks to complete. At that time the Council will vote to accept or reject the Negative Declaration. “We will get that document out prior to the 72 hour notification requirement,” Tatum said. “We will address every comment; they will be part of the final document.”

The public comment period was extended to August 15 during the Council’s July 13 meeting.

Speakers from the residential areas between Main and Home streets objected to the project based on traffic impacts near six public and private schools, street parking and safety issues, “poor planning,” and degradation of raptor and riparian habitat.

Terrence Tey came armed with a letter from the California Department of Fish and Wildlife received by the City 10 days prior to its first public hearing on the project and an Environmental Site Investigation Report conducted by Tetra Tech for the Los Angeles Department of Water and Power in 2009. The nursery was purchased by Bob Kingston approximately 15 years ago by current LADWP lease holder Bob Kingston. The parcel is currently in escrow. 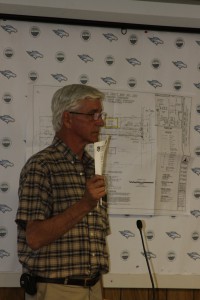 The CDFW letter recommended changes in two of the Declaration’s biological mitigation measures to address both raptor and non-raptor nests, buffers around any active nests, bird and bat surveys regardless of time of year due to nesting activities.

While the draft document found no issues with hazardous materials or water quality during construction, Tey pointed out sections in Tetra Tech’s report focusing on hazardous materials currently in the site’s soil and groundwater. The study involved seven drill sites with the results in four of the five tests (gasoline range organics, petroleum hydrocarbons, volatile organic compounds and pesticides and herbicides) showing no or low levels. But, tests for metals turned up levels exceeding the state’s Environmental Protection Act. Arsenic was present in unacceptable levels in the soils; beryllium, antimony, arsenic, cadmium and lead, in the groundwater 10-feet below the surface. According to Tey, the tests were not conducted on the southern part of the nursery site where residents on Rome Street say petroleum products and fertilizers were stored.

The report states “based on the concentrations of metals in soil … and groundwater …., there is a potential that metals could impact site use. Therefore, an evaluation of the risks to potential receptors (residential or commercial/industrial) from soil and groundwater beneath the site is recommended.”

“This information requires you reject the Negative Declaration,” Tey told the Council. 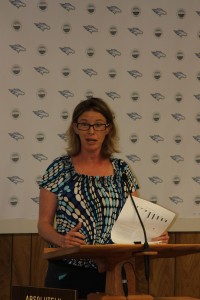 Julie Faber, one of the City’s Economic Development group leaders, noted the need for new, modern housing in Bishop

On the pro side, two members of the City’s Economic Development General Plan Amendment cited the need for housing in Bishop. “I ask that you support and respect someone willing to invest in our community,” said Allan Pietrasanta. Realtor Jake Rasmussen said the project’s density conformed to the neighborhood and “would enhance neighborhood home values.”

Bishop Nursery manager Liz Merrill addressed contentions that the west end of the nursery site was recently cleaned out as a “cover-up.” Noting that previous managers had not addressed storage behind the retail nursery, Merrill said “it was a mess back there. We just started the clean-up. There was no dumping, no cover-up. If a nursery is not workable (at this location)….it’s not a placeholder for their (neighbors’) peace and quiet.”

The good news is Rome is one of our nicer streets and will continue to be!

I’m pretty sure the nursery gets a heck of a lot more traffic now then if 15 houses were built.

Kingston gets to subdivide 2.75 acres 15 ways. The neighbors watch there property value depreciate. And of course the most satisfied of posters on this site obviously do not live next to this project, but they can post how absurd some of the neighbors objections were. Hypocrites some of you… Read more »

I lived on Rome Dr for 6 yrs on the south side. The site of Bishop Nursery is not a pristine location for any type of wildlife. The city of Bishop needs more and newer housing within its existing footprint instead of having sprawl like other towns and cities we’ve… Read more »

If you had heard the residents at the public hearing and you didn’t know anything about the lot in question you’d not only think that the nursery was a pristine wildlife refugee teaming with threatened and endangered species, you’d also think it was a hazardous waste site.

Key word is lived. The economic factors outweigh the concerns of the Rome dr. Residents. Wow Joe! so these residents should sacrifice for the greater good? And you have 26 thumbs up for your post. Joe, the guy who used to live on Rome dr. but no longer does not.… Read more »

It seems to me that the CEQA environmental review process should have occurred when LADWP made the decision to sell the land into private ownership. Every little scrap of private land around Bishop ultimately ends up as housing (or a more intense use) if the land use authority (the City… Read more »

I. feel kinda dumb, because I had to look up “nimby”. It’s one of those things you know in the back of your head , but if you haven’t used it or even heard it for a while, it doesn’t register.
Am I the only one ?

FYI- LADWP did complete an Environmental review in 2009 prior to placing the Nursery’s land up for auction- of course, the NIMBY’s of Rome Drive didn’t comment, were concerned about it then, or bid on the property at the auction.

Well, not exactly. LA did some soils testing, the Tetra Tech studies referenced by some of the Rome Dr. residents, but this was just for standard commercial property disclosure liability. The property was sold “as is” so disclosing potential contamination was important. The property was also sold without “all water… Read more »

I kind of agree eastern Sierra lady. But, behind K Mart is a totally different story. It’s dwp land. Not private property that was already zoned for housing when most of the people bought their homes. They knew this could happen.

I have to assume we’re talking old KMart and not Big K, Because Big K would really not make any sense and would probably have much higher environmental impacts. But that suggestion also seems to miss the point of how development works, as NIMBYs often do. The City isn’t the… Read more »

The meeting reeked of NIMBY-ism on the behalf of some particular Rome St. residents. They’ve cobbled together loose and nonsensical arguments that are really about preserving their residential lifestyles. One person who commented actually stated “This development should be built behind Kmart and not adjacent to my neighborhood.” -if that… Read more »

I always thought Bishop was typically a republican town…ie. a person gets to make the most of their assets, within the laws and regulations. Have you seen the residential area of downtown (west side) Bishop? I lived there for a while, development has been ‘anything goes’, as evidenced by almost… Read more »

Any money that is made will be invisible to all of you. Some developers and contractors will make a few buck. Everybody else will just see a few more houses and a little more traffic in the area. Is anybody really talking about housing? Housing for who? For what? None… Read more »

For refugees fleeing Mammoth’s delusional Park City hallucinations and the carpetbagging of Independence.

I”m sceptable of new neighbors .But I’m not going to stick the Environmental Protection Agency on them. Welcome to Bishop!

It’s chance for more tax revenue. It’s easy to see. Under the disguise of needing more housing. Why don’t you try to bring more jobs first. I know, that’s impossible. How much money is Kingston going to make subdividing 2.75 acres 15 ways? alot. Good luck to the folks who… Read more »