In further preparation for public hearings on the proposed 2009/10 Town of Mammoth Lakes Budget, which are now set to begin at the June 17 Town Council meeting, Town Manager Rob Clark presented the Council with three more white papers on critical items in the proposed budget. Previously Clark had presented the Council with white papers on Capital Improvement Funding, Staffing Levels, Reserve for Economic Uncertainty, and Police Staffing. The additional white papers presented on June 3 discussed the Towns Road Rehabilitation Program, the McFlex Property Exchange, and the Towns Fund Balances or Reserves. 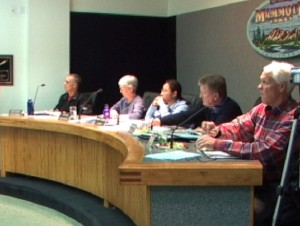 Following a national economic forecast from Clark, which was similar to the reports he has given for the past two months which describe many unknowns in the future of the national economy, Clark reviewed the three new white papers. White Paper #5 explained the Towns Fund Balances in response to Councilman John Eastmans request at the May 20 meeting to what reserve funds look like today compared to two years ago. However, the White Paper only went back one year, which did not satisfy Eastman. He requested that numbers from 2006/07 and 2007/08 be brought back to the June 17 meeting. He also asked that the numbers include assets sold by the Town in those time frames.

White Paper #6 explained the Towns negotiations with Mono County and Mammoth Hospital regarding the 10 acres of land purchased by the three parties. At this time, the plan is for the County to buy one-third of the Towns portion of the parcel at $1.2 million. The Hospital, which was forced to sell its portion to the Town several years ago when they were in financial distress, will begin to buy its portion back with an initial payment of $300,000.

White Paper #7 suggested that the Town build up its annual road rehabilitation expenditures by $100,000 per year until the expenditures are up $900,000 to $1,180,000 from what they are today. According to Clark, an outside engineering firm had recommended this in order to maintain the existing status of the Towns roads.

All of these items, as well as the rest of the 2009/10 budget will be discussed in detail at the June 17 meeting. Also at that meeting a third party consultant that the Town hired to review its primary General Fund Revenue Projections (TOT and Sales Tax) will report on their findings, as will the Citizens Budget Oversight Committee which has been meeting for the past few weeks.

We work to provide daily news to all of the Eastern Sierra, in the tradition of Eastern Sierra News Service and the Sierra Wave. We bring you daily happenings, local politics, crime, government dealings and fun stuff. Please contact us.
View all posts by News Staff →
Changes For Mammoth Bear Management
Mammoth Town Council Opposes Park Closures