More reports of coyotes in Mammoth Lakes today. The animals were seen by two Mammoth women in the Chair 4 parking lot scrounging for human trash. It was 4:30 in the afternoon. 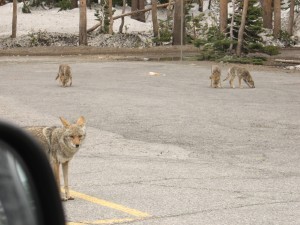 We did reach a wildlife biologist at the Department of Fish and Game. Alisa Ellsworth said the coyote sitings are common all up and down the Valley. She said coyotes are accustomed to being around people.

Ellsworth said Fish and Game recommends that people keep all food sources and trash away from the coyotes to discourage their proximity. Ellsworth also said that its wise to keep cats and small dogs inside, especially at night.

(PHOTO: Courtesy Barbara Richter) Ellsworth said that typically the coyotes are looking for food. Fish and Game does not advocate shooting coyotes but did say that they can be hunted by those who have a license. Shooting is not permitted within the Town limits of Mammoth Lakes. Ellsworth suggested that anyone with any questions should call Mammoth Police.

Mammoth locals have been calling Steve Searles, long time wildlife manager, about the coyote packs. He did not recommend indiscriminate shooting of coyotes. Searles did say he has, in past years, removed the alpha or head male in a pack which disburses the animals.

We work to provide daily news to all of the Eastern Sierra, in the tradition of Eastern Sierra News Service and the Sierra Wave. We bring you daily happenings, local politics, crime, government dealings and fun stuff. Please contact us.
View all posts by News Staff →
New Station for Bishop Police?
Supervisorial Tiff Over Congressman’s Visit