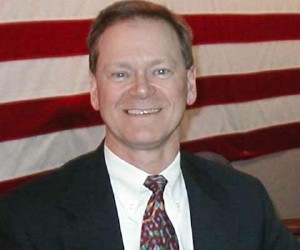 Bishop’s new City Administrator took time from his busy schedule at the California League of Cities conference to chat with us. I asked him why he wanted to live and work in Bishop?

He said he had watched Bishop for some time and dubbed it a “dream job.” Southworth also commented on his departure from the job as city administrator in Monroe, WA. He said he worked for a “full-time, strong mayor. For whatever reason, she decided to terminate the agreement.” Southworth said that the mayor did not give a reason, but he said, it just “didn’t work.” After that, Southworth began to search for another job. He studied a number of cities, including Bishop.

Any issues he may want to tackle here? Southworth said he has not heard of any main issues or challenges. He did say that generally the financial crunch of cities across the West would apply here:

Southworth said he would like to look at economic development for greater stability and expansion of current businesses. He said he would like to see vacant spaces filled up. Southworth responded to the question about his work with Indian tribes. He has had experience and sees this as an important issue in Bishop. He said it’s important to recognize that the Native American community has its own system and culture.

Southworth will spend a couple of weeks moving and then he starts work October 1st.

We work to provide daily news to all of the Eastern Sierra, in the tradition of Eastern Sierra News Service and the Sierra Wave. We bring you daily happenings, local politics, crime, government dealings and fun stuff. Please contact us.
View all posts by News Staff →
Bone Identification Cases Still Pending
National Epidemic: Over Half of Children and Teens Overweight or Obese