On the afternoon of Sunday, June 30, 2013, at approximately 1:30pm, Mono County Sheriff’s Dispatch received a call regarding an injured climber in the Clark Canyon area. 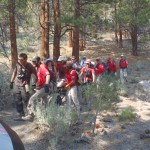 A 59-year-old climber, from San Francisco, CA, was reported injured while climbing in the Clark Canyon area. The Mono County Sheriff’s Search and Rescue (SAR) team and Mono County Paramedics were called out to aid in the rescue of the injured climber.

The paramedics and a SAR ground team were able to hike to her location. She was splinted and then evacuated by wheeled litter where Mono County Paramedics transported her to Mammoth Hospital for further treatment.

These guys are the unsung heroes of the High Country. They buy their own specialized equipment and clothing….train extensively and have to keep their EMT certs up to date and drop what they are doing to go out in all kinds of weather and conditions to help those who are… Read more »