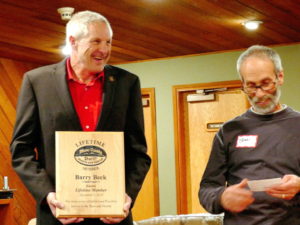 When called by the Mono County Sheriff’s Office, the Team responds for searches and rescues at any time, in any weather, for as long as it takes, for free. The Team has responded to 37 calls this year so far and has volunteered 3,410 hours.

Each year the Team holds an Awards Dinner to acknowledge the hard work its members have contributed and to honor members for their individual excellence and public service. The 2018 Awards Dinner was held on Saturday, December 8.

The Team’s highest honor, election to status as a Lifetime Member, is only rarely conferred to a Rescue Member who has made unusual, faithful, and regular contributions to the Team and to the welfare of victims over a significant number of years.

This year Barry Beck received this high honor. Barry has served the Team very actively for 14 years. Records show that he has participated in 230 search and rescue missions, 307 trainings, and 243 meetings, for a total of 780 Team events. This is an enormous voluntary commitment of time and talent to the County and the Team.

Barry has faithfully served the Team in a wide variety of roles, including Board
member, Training Officer, and currently as the Team President. He is very versatile and dependable and has consistently been eager to accept difficult field assignments in any weather. 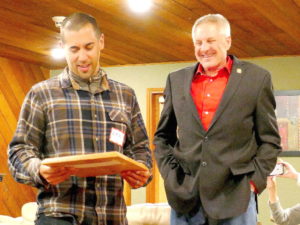 Eric serves the Team as a member of the Board of Directors and is a very active responder to search and rescue calls. Since joining the team in 2017, he has responded to 121 team events.

New members in training are called Candidate Members, who must undergo training, practice, and testing in eighteen skill categories before being considered for advancement to Rescue Member.

Examples of these skills include first aid and victim care, tracking, technical rescue, er mountain navigation, helicopter operations, and skill with electronic aids such as computers, radios, avalanche transceivers, and GPS receivers. Completion of all requirements takes a lot of dedication and faithfulness over a period that is typically a year or more. 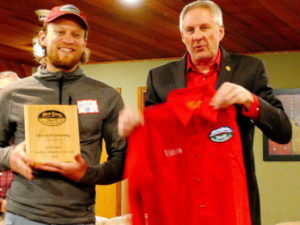 This year the Team selected Mitchell Quiring as the Rick Mosher Candidate Member of the Year. Mitch is very active in many aspects of response to calls, training, and team readiness. Since joining the team in April of this year, he has participated in 51 team events.

The Team’s history goes back to 1966, and hundreds of members have come and gone as their lives changed. Jim Gilbreath joined the team in 1993 and is only the second member to achieve a 25-year tenure. 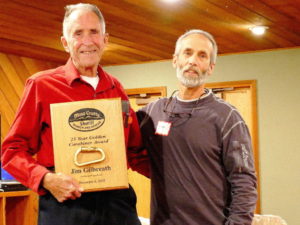 Jim Gilbreath has been a key player in many of the Team’s affairs, including serving as a member of the Board of Directors, Vice President, Operations Leader, training instructor, and record keeper and reporter.

He was awarded the Golden Carabiner Award for his 25 years of excellent service.

Heidi Vetter received an award for 10 years of service. She has been an active member since 2008 and has responded to 304 team events. She has served the Team as Board Member, Vice President, Operations Leader, Secretary, and training instructor.

“They also serve who stand and wait” is a famous quote by Milton over 300 years ago. In this case it applies to two Team members’ wives – Valerie Case and Jean Gilbreath, who for over 25 years have endured with grace, understanding, and encouragement the hundreds of absences from home by their SAR husbands. They were awarded SAR WIDOW plaques.

The SAR team wishes to thank members of the community for their generous support.