On Monday, July 27, 2015, the Mono County Sheriff’s Office Dispatch received a call regarding an injured hiker along the Pacific Crest Trail (PCT). 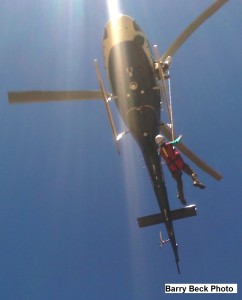 A female hiker on the Pacific Crest Trail, at Lake Harriet, approximately 18 miles east of Bridgeport, called for help using a satellite phone.  She had sustained an ankle injury and was unable to hike out of her current location along the trail. The Mono County Sheriff’s Search and Rescue (SAR) Team was dispatched to assist.

Due to the extreme distance from the nearest trailhead, the Mono County Sheriff’s Search and Rescue Team requested the assistance of a California Highway Patrol (CHP) helicopter to extract the hiker from the backcountry.  Due to steep terrain, the helicopter was unable to land near the hiker. The helicopter flew to Bridgeport to pick up additional fuel and also requested a SAR Team rescue member to be available for insertion into the field.  The SAR Team member was taken by helicopter to the hiker’s location and lowered by the helicopter’s cable hoist to the ground near the injured hiker.  The hiker was hoisted up to the helicopter and taken to Bridgeport for evaluation by Mono County Paramedics.

The Mono County Sheriff’s Search and Rescue Team thanks the California Highway Patrol for their assistance and the use of the H20.

On the evening of Saturday, July 25, 2015, at approximately 10:30PM, the Mono County Sheriff’s Office received a call regarding two lost backpackers near the summit of Mt. Conness.

Two hikers from Petaluma, California, had summited Mt. Conness, but upon their descent, they could not find their descent route.  They called the Mono County Sheriff’s Office via cell phone from a ridge southeast of the summit, approximately on the Yosemite Park boundary, at 12,300 feet. They were advised to stay where they were and shelter as well as possible in place until rescuers could reach them.

The Mono County Sheriff’s Search and Rescue Team (SAR) was called to aid in locating the hikers and bring them back to familiar territory.  The hikers attempted to find their way down, and last contact was made at 2:30AM, north of Alpine Lake.  SAR members hiked in from Saddlebag Lake, and within a few hours, were able to find the pair about a mile west of the Carnegie Research Station.  They were escorted out to Saddlebag Lake.