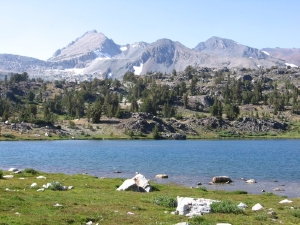 On the evening of Wednesday, June 19, 2013, at approximately 8:45pm, Mono County Sheriff’s Dispatch received a call regarding overdue day hikers in the Saddlebag Lake area.

A couple hiking with their grandson, from Wooster, OH, was reported overdue by their son when they didn’t return to Bishop after their day hike to Saddlebag Lake. They had only packed a backpack with a lunch and limited supplies. They had taken the boat taxi across the lake and were expected to catch the last taxi back at the end of the day. There was concern due to the age of the couple and of the grandson. They were not dressed for overnight conditions, had no light source, no resources to make a fire, and were unfamiliar with the area.

The Mono County Sheriff’s Search and Rescue (SAR) team was called out to aid in the search for the missing day hikers. Eight (8) SAR team members responded to the area to begin a ground search effort. At least six (6) spontaneous volunteers, including staff from Saddlebag Lake resort, hiked in and checked the trails around the lake, leading in and out, while the SAR response was underway. There was no sign of the overdue day hikers. A check to see if their vehicle was still at the trailhead showed that the vehicle had left the area. As efforts to locate the vehicle were underway, Mono County Sheriff’s Dispatch received a call from the reporting party (the son) that the overdue hikers had in fact returned home and were safe. They had been delayed from their hike and missed the last water taxi. They had to hike around the lake and back to their vehicle but safely made it home.

Speaking of missing in the Sierras’,it was 7 years ago today that Renee Fox went missing in Mazourka Canyon after her vehicle became disabled 16 miles from Independence.Six weeks later,her body was found 11 miles from the vehicle just off the road behind some brush.

What is wrong with those older mature hikers (do they have Altzheimers?). guess who is “NOT” gonna be in charge of anything 2 do w/ anybody! Hey, Notify the authorities that you are AOK. All the manpower & energy wasted. Thank G*D everyone is safe.

Right, nobody under 65 ever needs help. Although with so many people going into the near and back country, it would be good to have cell service go farther back into the wilderness. It would save time just by letting their phone or device be triangulated. Wouldn’t be perfect of… Read more »

It doesn’t sound like anything was wrong with the hikers. They missed the boat, walked back to the parking lot and went home. The rest sounds more like miscommunication than anything else.

I missed the water taxi once, and once was enough. Saddlebag is a lot longer than it looks.