By News Staff on May 23, 2014 in Government Agencies/Utilities 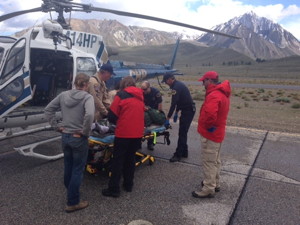 On the afternoon of Thursday, May 22, 2014, at approximately 12:55 pm, Mono County Sheriff’s Dispatch received a call regarding an injured trail maintenance crew member in the Davis Lakes area.

The Mono County Sheriff’s Search and Rescue (SAR) Team was dispatched to aid the crew member. Due to the area of the trail where the crews were working, approximately five (5) miles south of the Crowley Lake community, the SAR team requested assistance of the California Highway Patrol H40 helicopter out of Fresno. The H40 was available and was able to land in a meadow approximately 1/3 of a mile away from the crew member’s camp. With the assistance of other crew members, they were able to carry the injured male to the helicopter landing zone. He was then flown to the Mammoth-Yosemite Airport where he was met by Mono County Paramedics and transported via ambulance to Mammoth Hospital for treatment.

We work to provide daily news to all of the Eastern Sierra, in the tradition of Eastern Sierra News Service and the Sierra Wave. We bring you daily happenings, local politics, crime, government dealings and fun stuff. Please contact us.
View all posts by News Staff →
Bureaucrat Beat: open secret, Shakespeare, and anonymous
CHP, MCSO arrest man on DUI, weapon and drug charges
4 Comments
Newest
Oldest Most Voted
Inline Feedbacks
View all comments

joel…Are you serious….or just looking for a negative reaction ?……A 5 mile hike over rough terrain with an injured hiker unable to put weight on his knee…..why wouldn’t you request the aid of the CHP helicopter ?…..Are you afraid it might cost YOU tax money to help save this guy… Read more »

“We do searches and rescues at any time,
in any weather,
for as long as it takes,
for free…”

why did you guys call the ‘copter – if all it would have took is hike in and out?

How many people have you carried any distance? It’s not as easy as it sounds, and it doesn’t sound easy.