By News Staff on August 15, 2014 in Government Agencies/Utilities 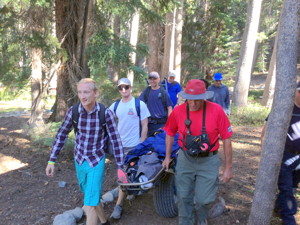 Search and Rescue Team Operation: Aid to an injured hiker at Arrowhead Lake

On the afternoon of Thursday, August 14th, 2014, at approximately 2:00pm, Mono County Sheriff’s Dispatch received a call regarding an injured hiker at Arrowhead Lake.

A 32-year old female hiked to Arrowhead Lake were she sustained a leg fracture by striking a tree while swinging from a rope over the lake. Due to her leg fracture, she was unable to hike out. The Mono County Sheriff’s Search and Rescue (SAR) team was called to aid the injured hiker.

Members from the SAR team, and personnel from Mono County Paramedics and the Mammoth Lakes Fire Department, hiked to her location, stabilized the fracture and transported her one and a half miles, using a wheeled litter, to the ambulance at the trailhead. The rescuers were also assisted in the carryout by a group of cross-country runners from California State University San Marcos. The injured hiker was transported via ambulance to Mammoth Hospital for further treatment.

We work to provide daily news to all of the Eastern Sierra, in the tradition of Eastern Sierra News Service and the Sierra Wave. We bring you daily happenings, local politics, crime, government dealings and fun stuff. Please contact us.
View all posts by News Staff →
Dream continues
Vagabond – a total loss
2 Comments
Newest
Oldest Most Voted
Inline Feedbacks
View all comments

Yup, that’s right around the age I thought to myself “I can’t be doing this s*** anymore.”