By News Staff on August 28, 2014 in Government Agencies/Utilities 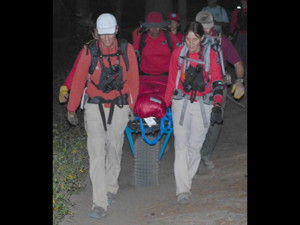 Search and Rescue Team Operation: Aid to an ill hiker on Duck Pass

On the afternoon of Tuesday, August 26, 2014, at approximately 2:45pm, Mono County Sheriff’s Dispatch received a call regarding a hiker on the Duck Pass Trail that needed assistance.

A 77-year-old woman, from San Diego, was hiking to the top of Duck Pass with her hiking club. On the return climb out of Barney Lake Basin, she suddenly became quite ill and was unable to continue. The Mono County Sheriff’s Search and Rescue (SAR) Team was called to aid the hiker on the Duck Pass Trail.

Thirteen search and rescue members responded to the Coldwater trailhead. A hasty team of two quickly departed to locate and assess the hiker. They were closely followed by three other teams with gear and a wheeled litter. A mule and packer from the Mammoth Lakes Pack Outfit assisted the SAR team in quickly transporting the wheeled litter to the hiker’s location.

The hiker was evacuated approximately three miles via wheeled litter to the trailhead, where she was met by Mono County Paramedics and transported via ambulance to Mammoth Hospital for further treatment.