By News Staff on August 13, 2014 in Government Agencies/Utilities 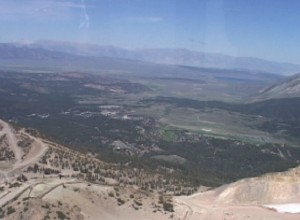 On the evening of Tuesday, August 12th, 2014, at approximately 5:30pm, Mono County Sheriff’s Dispatch received a 911 call regarding two lost hikers out of Red’s Meadow.

Two hikers were on a day hike from Red’s Meadow to Rainbow Falls. On the return trip from Rainbow Falls to Red’s Meadow, the hikers took the wrong trail and became lost. One of the hikers was diabetic and did not bring any medication on the day hike.  The hiker was beginning to feel chilled and other negative effects of the diabetes, and since they were lost, wasn’t sure how far they could continue hiking. The other hiker had cell phone reception and was able to call 911 and give their location near Pond Lily Lake, about 5 miles south of Red’s Meadow.

The Mono County Sheriff’s Search and Rescue (SAR) team was called to aid the lost hikers. Six SAR team members staged at Minaret Vista. Due to the medical circumstance, and the hikers remote location, attempts were made to get air support for the rescue. A 551 helicopter from Yosemite National Park was available to assist the SAR team. The helicopter crew was able to fly to the hikers location, land and transport them to the SAR base at Minaret Vista. The diabetic hiker was assessed by Mono County Paramedics and required no further medical treatment. The hikers were taken to their vehicle parked near Mammoth Mountain.

The Mono County Sheriff’s Search and Rescue (SAR) team reminds anyone traveling in the backcountry, even if just for a day hike, to always be prepared and carry adequate supplies, including any medications. It is important to be aware that is might take search and rescue teams time to come to your aid if you are lost, injured or ill.

We work to provide daily news to all of the Eastern Sierra, in the tradition of Eastern Sierra News Service and the Sierra Wave. We bring you daily happenings, local politics, crime, government dealings and fun stuff. Please contact us.
View all posts by News Staff →
Buckingham chosen as City Manager of Morro Bay
Fire hits Vagabond Inn
9 Comments
Newest
Oldest Most Voted
Inline Feedbacks
View all comments

My sister was day hiking with 2 diabetics who left their insulin in the car, and didn’t bring lunch. After giving them her food and extra water, she hiked nearly 3 miles back to their car to retrieve their life saving meds, and never hiked with them again. Some people… Read more »

Tinner, the problem with charging for rescues is that eventually, someone will die because they were worried about the cost of a rescue — not a good scenario.

Oh yeah, that liability thing. Maybe we could treat calling on Search and Rescue similar to calling 911. We are required to have a wooding map when we collect firewood, is it required to have a map when in the backcountry where a permit is required? I know these peeps… Read more »

I think we need to start charging for search and rescue operations if those being rescued are found to be negligently prepared for backcountry trips…or just plain stupid.
Last I checked there were detailed trail maps of Red’s Meadow and packs that would accomodate medication for a diabetic.

Let’s see…I’m ONLY going on a day hike and I’m diabetic, but there’s no reason to bring any of my medication along because I can just call for a helicopter e-vac when I take a wrong turn in an area that I’m totally un-familiar with, and WHY should I be… Read more »

So true, Rick. This is a continuation of the summer pattern, relying on others to save your behind while making ridiculously bad choices. I wondered how in the world could 2 hikers end up at Pond Lily Lake, after visiting Rainbow Falls. The trail back to Reds Meadow is so… Read more »

Pretty judgmental coming from an entire area that relies on fire fighters to save their homes in the event of wild fire.

What do firefighters have to do with ill prepared hikers?
Why do you sound all offended Mark?

I’m not offended at all. Much of what we all write here is taken the wrong way by those that read it. If you’re not prepared hiking SAR rescues you, if you haven’t kept up on your brush clearance fire fighters rescue you. I think we should start billing home… Read more »