On the afternoon of Friday, August 15th, 2014, at approximately 12:55pm, Mono County Sheriff’s Dispatch received a call regarding an injured climber on a ridge in the Saw Tooth Range near Bridgeport. 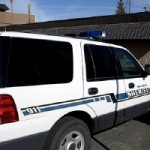 Two climbers were attempting to climb a ridge in the Saw Tooth Range near Bridgeport. During their ascent, they were climbing up a 45-degree ice field with ice axes.

One of the climbers, a 31-year old male visiting from Japan, fell when his ice axe lost purchase on the ice. He slid and tumbled 125 feet down the ice into the rocks below. He sustained serious injuries to his arms (with a bone breaking the skin and visible), ribs and abdomen.

There was heavy bleeding and the injured climber asked his friend to tourniquet-pressure dress both of his arms with his bandana and webbing. There was no cell phone service in their location, so, after treating his friend’s injuries, the second climber hiked out two and a half hours to find help. The Mono County Sheriff’s Search and Rescue (SAR) Team was called to aid the injured climber.

Six SAR Team members staged at Bryant Airfield in Bridgeport. A helicopter from Yosemite National Park attempted to locate the injured climber. Initially, the climber was unable to be located via air, so a ground team was inserted to search for the climber. It was discovered that the injured climber had moved from where his friend had left him and attempted to walk out of the area. Fortunately, he was located, stabilized and flown out of the area for further medical treatment.