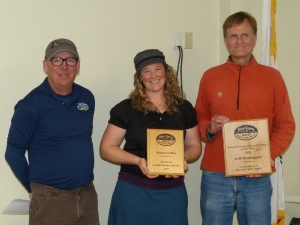 Member of the Year Jeff Holmquist and Candidate of the Year Megan Guffey being presented their awards by SAR President Dan Corning.

Each year, the Team honors members for their individual excellence and public service.  Two annual awards are given by the Team each year to honor members who have excelled.

The Pete Schoerner Rescue Member of the Year for 2012 is Jeff Holmquist.  Jeff serves the Team as a member of the Board of Directors, and is a past President, Vice President, and Training Officer.  This is the second time he has been selected by the Team for this honor.  He is also one of very few honored with selection as Lifetime Members.  Jeff participated in 70 team events in 2012, including 22 field missions.  Since 2000, Jeff has served the County on 894 team events, including 386 rescues and searches.  He has a wide variety of skills, frequently serves as Operations Leader, teaches training courses, and is one of the team’s key players in all types of missions.

This year the team selected Megan Guffey as the Rick Mosher Candidate Member of the Year.  Megan has been very active and faithful in both her training and in rescue operations.  Since beginning her training of April of 2012, she has participated in 35 Team events and 5 rescues and searches.  The 2012 honorees were presented with laser engraved cherry wood plaques.

We work to provide daily news to all of the Eastern Sierra, in the tradition of Eastern Sierra News Service and the Sierra Wave. We bring you daily happenings, local politics, crime, government dealings and fun stuff. Please contact us.
View all posts by News Staff →
Chamber doings in Lone Pine
Wilbrecht’s separation agreement reveals some details
1 Comment
Newest
Oldest Most Voted
Inline Feedbacks
View all comments

Kudos to these two and to all the volunteers at MonoSAR.