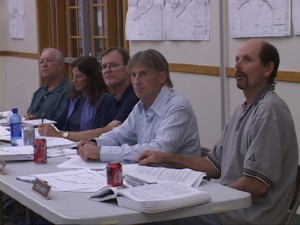 Hooper had told the Commission that he would reduce density on his land along Rock Creek in the area which formerly housed Paradise Lodge and Resort. His 12 homes would sit on one and a half acre lots. He vowed to deed a well location for the community, 5.7 acres into Open Space and permanent access to the Rock Creek trailhead, plus a parking lot.

Hooper made it clear he would not re-open the restaurant that now sits in considerable disrepair. He also pointed out that his project would not disturb much in the area that has been disturbed by a business for many years. He said that letters from the public had been included in the project and brought about good changes.

Some Paradise residents spoke at the meeting and complained about the loss of historic structures and non-conforming uses along the creek. Others did not like equestrian uses and fire rings planned.

After more than three hours of meeting, the Mono Planning Commissioners decided they were not ready to make a decision. Mr. Hooper said he did not want the issue continued, but commissioners decided to meet again on November 5th. Meanwhile, staff and the developer will try to work things out.

Still generating doubts for commissioners – the fate of the old restaurant, non-conforming uses, and wildlife impacts. The Department of Fish and Game claims Hooper’s homes would hurt the migrating deer herd. They submitted a letter the day of the meeting, but did not show up.

The 12-home project includes 40 mitigation measures and 64 conditions on the tentative tract map.

We work to provide daily news to all of the Eastern Sierra, in the tradition of Eastern Sierra News Service and the Sierra Wave. We bring you daily happenings, local politics, crime, government dealings and fun stuff. Please contact us.
View all posts by News Staff →
Citizens Accuse Inyo Supervisors of Brown Act Violation
Mammoth’s Hot Creek Lawsuit Appeal Argued Monday in Sacramento