A Bishop woman called police in a kind of panic over the week-end. She told officers that a man had held her at knife point. The man, 29 year old Anthony Andreas, formerly of Mono County, had passed out in an apartment. Inyo's Special Enforcement Team acted fast and made the arrest. 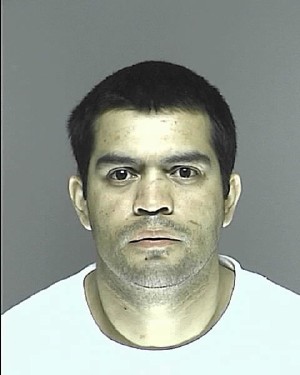 The specially trained unified team of Bishop Police officers and Inyo Sheriff's deputies and investigators rushed the Primrose Lane Apartments around 10am Saturday when the suspect was just waking up. Inyo officers had earlier looked for Andreas on a domestic violence case two weeks ago.

We work to provide daily news to all of the Eastern Sierra, in the tradition of Eastern Sierra News Service and the Sierra Wave. We bring you daily happenings, local politics, crime, government dealings and fun stuff. Please contact us.
View all posts by News Staff →
Million Dollar Lottery Winner in Mono County
High Wind Plus Highway Dust Slows Down 395 Traffic