In Mono County, the Public Health Department has created a Marijuana Task Force. They had planned to hold a meeting 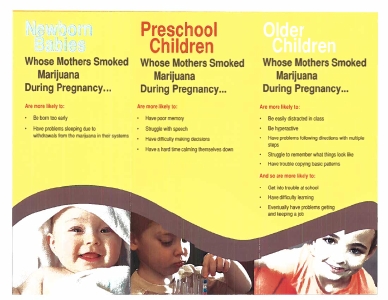 Mono Mental Health Director Ann Gimpel, who sits on the task force, explained that the task force has started to work on a community campaign. It deals with use of marijuana by pregnant women. Gimpel said Mono has borrowed a poster campaign from Mendocino County. The message – things your baby hopes you know about marijuana – a message to avoid pot during pregnancy.

Gimpel said just because marijuana is a natural herb does not mean it’s safe for a pregnancy. A quick internet google of marijuana and pregnancy reveals widely different views on the impacts pot has on a fetus. Some sources say marijuana use can make babies vulnerable to disease and learning disabilities. Other sources deny any impacts.

Ms. Gimpel said that pregnant women have been advised against use of such things as aspirin and prescription drugs during pregnancy. She points to potential marijuana risks as concerns. “We hope to create a community campaign,” said Gimpel.

Of today’s meeting, she said that representatives of Mental Health, Wild Iris and the District Attorney’s office would attend. She said invitations had been extended to the medical marijuana co-ops in Mammoth. “We want to have an open dialogue about the campaign,” she said. Gimpel said it is hoped the posters might go up at Mammoth’s co-ops.

Today’s meeting was scheduled for 3pm at the Town/ County Conference Room in the Minaret Shopping Center.