By News Staff on January 28, 2014 in Government Agencies/Utilities 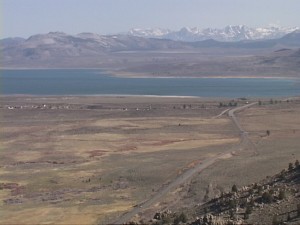 As the Owens Valley scrambles for some kind of protection in the apparent drought, Mono Lake protectors have some good news – definite terms in a State Water License for the Department of Water and Power.

Geoff McQuilkin, Executive Director of the Mono Lake Committee, said the license spells out that both sides can read the lake level and accordingly the license tells an allowed amount of water export for DWP. Said McQuilkin, “There is no room for debate. This has always been followed.”

In spite of protections, the Mono Lake Director called the drought “depressing.” He said the level of Mono Lake is going down. Said McQuilkin, “This will be the third year of loss.” He said the lake now sits at 6380.5 feet above sea level. According to the license, DWP water exports are cut back when the lake level goes below 6380 feet.

McQuilkin said if the lake level is above 6380 feet, DWP can export 16,000 acre feet for the year. If the level goes below that, the export drops to 4,500 acre feet. The goal of a State Order and reduced exports from the Mono Basin is a long-term average lake level of 6392 feet. McQuilkin said the Committee has not lost faith. He said they see the level go up in wet years.

The recently signed agreement between DWP and the Committee says DWP will make more environmental improvements in the basin and after that is done will get a one-time extra 12,000 acre feet of water. McQuilkin said that’s four or five years out.

What if DWP declared a municipal emergency and tried to break the water license? McQuilkin said he thinks they would be unsuccessful. He said, “We would certainly oppose it. That would enter a risk zone and air quality issues.”

Benett has it right about the water rules that protect Mono Lake in tough drought times like these. Skepticism about DWP’s interests when it comes to water in the Eastern Sierra is certainly warranted, as the comments here show, but the water export situation at Mono Lake is different than… Read more »

Geof, Thanks for your reply. I realize you are closer to what goes on than most of us here. I do not trust DWP and the committee should deal with caution. DWP has made it very clear what their intentions are. They can easily take this to court if they… Read more »

Sounds like LA can get water if they need to regardless of agreements.
I think it is time that we as eastern sierra residents are concerned lobby for those folks in LA to get rid of their expansive green lawns.

Mongo The Idiot
Reply to  mk

Are LA lawns protected by the state in times of drought?

Still wringing that wet hankie Mongo? LA has a water rationing ordinance that limits the days you are permitted to water and the number of minutes per day you may water on your assigned days. Consider that LA uses less than 125 gallons per day per person while Mono County… Read more »

DT Comment is dis-information; LA aqueduct water is distributed and sold to many So. Cal communities outside LA City. http://en.wikipedia.org/wiki/Metropolitan_Water_District Your figures are deceptive because you are looking at gross usage numbers for Owens based on a population of about 20,000 which includes agriculture. LA’s pop is at 3.85 million… Read more »

Water,Mocassin
Reply to  Mongo The Idiot

Mongo, Problem is that Owens Lake is a salt lake with no outlet that last overflowed around 2000 years ago. Assuming lake levels were relatively stable when white settlers arrived, as some say, then inflow to the lake equaled evaporation. Even if all the natural watershed was returned to lake,… Read more »

Tortoise ,
where do you get your numbers from?
Mono county person uses 450 gallons.
and LA only 125

Those numbers are a preposterous as they sound. All I know my family uses far less than 50 gallons. i just looked at the bill

DT, there has been controversy over these numbers for decades. The Eastern Sierra plays home to millions of tourists and passersby. This water use is in the calculation. Even if water use were that high, it mostly goes back into the groundwater, and God knows we need that. Let’s move… Read more »

Air quality aside, what happens if coyotes can get at gull rookeries on the islands due to the level of the lake dropping to the point where the islands become connected to the shore? That should not be allowed to happen.

I don’t believe that can happen re: export now. Years-long drought could do it naturally, but in the past use of dynamite has broken up any land bridge.
BK

The state license that protects Mono Lake is specific to Mono Lake. Owens Lake has no such license protecting it.

Mono Lake Committee: Hey, DWP. Mono Lake is too low. DWP: Oops. We’ll stop taking too much water real soon now — sorry. MLC: But, but… DWP: Not to worry. We’ll do some environmental improvements just as soon as we can… MLC: But, but… DWP: You’ve got a real nice… Read more »

Somehow I just knew somebody would be whining about what’s going on in Mono County. Especially if the whiner is from Inyo County. : >