For some time now, those who wanted to really get a firsthand look at Mono Lake could get that look from a boat tour. Captain Tom Crowe of Mono Lake Boat Tours had said he would no longer do business with the State Parks Department, but Tuesday a Parks official told us that Crowe has re-contacted Parks headquarters and now does want to negotiate a deal. 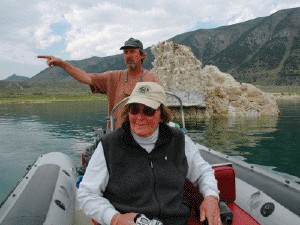 Crowe’s website had blamed State Parks the Mono Lake Committee for his decision to call it quits. He said that the Parks System refused to issue an operating permit to him for 2009. Crowe claimed that he has had to “nearly beg every year to have my permit renewed.”

Pam Armas, District Superintendent for the Sierra District of the California State Parks Department told us that Crowe had stopped negotiations on a concessionaire agreement and told Senator Dave Cox’s office that he would not do business with State Parks.

Armas said that recently Crowe got in touch with Park’s headquarters and said he would like to have an agreement to operate the boat tours. Armas said Parks officials would contact Crowe for possible meeting dates.

We have been unable to reach Tom Crowe directly for his comment.

We work to provide daily news to all of the Eastern Sierra, in the tradition of Eastern Sierra News Service and the Sierra Wave. We bring you daily happenings, local politics, crime, government dealings and fun stuff. Please contact us.
View all posts by News Staff →
ATF Investigates Barker Fire
Special Election Results