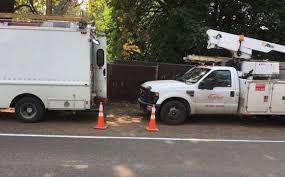 Mono County’s IT Director Nate Greenberg feels he’s finally making progress with Frontier Communications, but cautioned the Board of Supervisors not to start counting chickens.

Phone Service has been sketchy in part of the County, the took a 48-hour nose dive in late March with a total communication black out from Ridgecrest to north of Lee Vining after a fiber optic cable broke.

Greenberg had been encouraging, or hounding, frontier to develop redundancy in the system.  Either Greenberg or a heated meeting with the California Public Utility commission got Frontier’s attention.

A letter from Frontier to the County Board of Supervisors explained the outage.  While doing maintenance on its radio link, Frontier had patched the system into the fiber path, then forgot to switch it back.  When the fiber cable broke, so did the service.

Plans going forward include equipment “to build a diverse calling route from Mammoth to the Bridgeport public-safety answering points”and to invest in high speed internet diversity.

Redundancy in cell service is a little more complicated.  According to Frontier’s letter, “Frontier is working with both AT&T and Verizon to adopt the most current technology.”  The letter explains both of the above are SONET (Synchronous Optical Network) based and need to switch over to Frontier’s “newly-established diverse IP (Internet Protocol) links.”

Supervisor Fred Stump wasn’t totally satisfied.  “Frontier continues to ignore a primary highway corridor” in Mono County, he said, point to Route 6 through Chalfant, Hammil Valley and Benton.  “Phone service with 80-percent outages is not acceptable, no cell service is not acceptable,” he said.

Beefing up redundancy between Mammoth and Bridgeport won’t do a thing for the Route 6 communities.