Our own Tom Woods moderated the discussion, offering a wide range of questions to incumbent Vikki Bauer and challenger Dorothy Burdette.
Topics included affordable housing, public transportation and qualifying experience, but the majority of questions involved issues related to the economic future of June Lake, and the proposed Rodeo Grounds development, which continued to be the divining rod of this race, with Bauer justifying her support as Burdette clearly opposed it.

Bauer’s support appeared somewhat tempered, however, compared to what it has been in the past. Bauer said she thinks 90 foot buildings are “too high,” and later said she did not support a General Plan amendment for that height. She also said that Intrawest would not be her developer of first choice, but nonetheless believes the project is crucial to maintain the economic health of June Lake.
Supervisor Vikki Bauer
Bauer downplayed her role in the early stages of the design process, suggesting that Supervisors “don’t have any say” in the project before it comes to a vote. Bauer resisted questions comparing the Village at Mammoth to the June proposal. She said what is happening in the Mammoth Village is “not relevant” to the June Lake Loop.

Burdette didn’t think the comparison was irrelevant. She said the Mammoth Village is 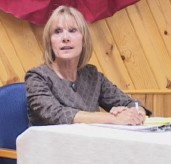 “ridiculous,” and expects that any similar development in June “will be empty.” Burdette said the idea of a 90 foot building is “absurd,” and said that she would ask developers to stay within existing code. “We need development,” Burdette said, “but the Rodeo Grounds proposal is much too large.”

Burdette said that “now is the time” for the community to begin diversifying the economic base, and not wait another 10 years for Rodeo Grounds development to come to their rescue.

Responding to the prospect of June Mountain closure, Bauer called the Mountain the “lynchpin” of the June economy,and said she would do whatever it took to keep Candidate Dorothy Burdette

Burdette was not so convinced, saying it is not the community’s responsibility to make the mountain profitable. If the mountain closed, Burdette suggested the community should consider operating it themselves. Burdette said the Mountain’s bottom line is not her concern, saying the “integrity of our community is more important.”

Bauer discussed the intricacies of the ESTA budget and explained why June Lakes service had recently been cancelled, and offered up ideas for future solutions. Burdette was able to point out the loss of local service on Bauer’s watch but did not offer any solutions.

Burdette expressed dissatisfaction with the county’s progress on affordable housing. Bauer defended the Housing Authority’s progress, explaining that although little had been accomplished, the “groundwork has been laid” for the future, when development will be forced to provide affordable housing as projects are built.

We work to provide daily news to all of the Eastern Sierra, in the tradition of Eastern Sierra News Service and the Sierra Wave. We bring you daily happenings, local politics, crime, government dealings and fun stuff. Please contact us.
View all posts by News Staff →
Marge Papp’s Walk to Help Mammoth Lakes Cancer Patients
Neglected Roads Spark South-North Outburst at Inyo Supervisors