Mono County, Calif. – On Friday July 11, 2014, Mono County’s exhibit at the California State Fair competition was honored with three Awards; the Gold Award, as well as the award for Best Use of Products, Produce or Artifacts, and Best Visitor Experience. The County’s exhibit this year showcases the west’s largest unrestored ghost town, Bodie State Historic Park, which is one of the County’s most visited destinations. 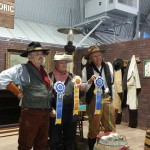 Mono County Board of Supervisor Chairman Larry K.  Johnston ommented, “This year’s exhibit is truly outstanding and our County’s number of wards reflects that effort! Bringing home three awards is quite an accomplishment. Mono County’s Economic Development and Tourism Department along with exhibit designer John Queirolo and Dianne Oneto did an outstanding job in bringing Bodie and historic Mono County to life. Over 800,000 people will see Mono County’s display and our local economy will feel the results as visitors come to Mono County.”

Mono County Economic Development staff worked closely with John Queirolo from Fashion Stables to establish the design direction for the exhibit which included a scenic backdrop of Convict Lake as well as a replication of a Bodie Saloon, complete with swinging doors, honkey tonk music, roulette table, and numerous artifacts and antiques. 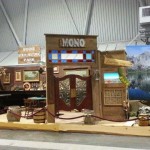 The Blue Canyon Gang served as re-enactors bringing to life Bodie’s golden era. Bodie once was the largest city in the Eastern Sierra and was the heart of Mono County. It is now one of the most visited state parks receiving hundreds of thousands of visitors from across the globe annually.
Mono County has received awards at the State Fair every year it has
participated since 2008. This is the third time the County has taken the
award for Best Use of Products, Produce or Artifacts – the first time
was in 2010. Thirty-three counties are participating this year in the
County Exhibit Competition at the California State Fair, which runs
July 11-27 in Sacramento.