Bridgeport, CA – On March 16, 2016, Mono County’s role in the collaborative effort to conserve the Bi-State Distinct Population Segment (Bi-State DPS) of Greater Sage-grouse was recognized during the Bureau of Land Management (BLM) and US Forest Service (USFS) Joint Awards Reception held at the 81st North American Wildlife and Natural Resources Conference in Pittsburgh, PA. Mono County was honored with the Conservation Leadership Partner of the Year award, which recognizes outstanding conservation accomplishments for fish, wildlife, and/or native plants and their habitat on public lands. 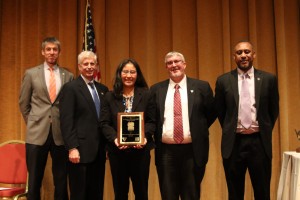 “Mono County has been an exemplary partner for the BLM and the Forest Service in support of Bi-state sage-grouse conservation, taking an innovative approach to dealing with a potential Endangered Species Act listing. The County was proactive and dove into helping with or leading projects to conserve the Bi-State sage-grouse and its habitat across jurisdictional boundaries, and assisted with activities that would benefit the bird across its entire range, not just within the county. The County’s part in summarizing past conservation activities completed by the Local Area Working Group (LAWG) and the future commitments of the LAWG to fund high priority sage-grouse projects was imperative in informing the decision not to list the DPS as Threatened under the Endangered Species Act in April of 2015,” noted Steve Small, BLM, Chief, Division of Fish and Wildlife Conservation, during the presentation.

“The BLM has been a fantastic partner and we have a great story to tell about Bi-State sage-grouse conservation. We are but one part of the effort which, besides the BLM, also includes the US Forest Service, Natural Resources Conservation Service (NRCS), US Fish and Wildlife Service, US Geological Survey (USGS), Nevada Department of Wildlife, California Department of Fish and Wildlife, and private ranchers and landowners. We are honored to accept this award in recognition of the good work being done by all our partners,” stated Wendy Sugimura, Mono County, at the award reception.

“This is a big deal – only one award is given a year, and typically it’s given to large, well-funded organizations whose sole mission is conservation. For a county to receive it is unusual, and Mono County should be very proud to have received this distinguished award,” explained Steve Nelson, Field Manager for the Bishop BLM Office, which nominated Mono County for the award. “There’s no other county anywhere in the nation, that I’m aware of, that provides the kind of support and commitment for sage-grouse conservation that we experience here in our partnership with Mono County.”

Mono County is a part of the Local Area Working Group (LAWG) for the Bi-State sage-grouse and has participated at varying levels since 2002. In 2012, the County increased its involvement and became a leading partner in the work to support and implement conservation actions for the Bi-State DPS and its habitat.

Tim Fesko, Mono County Board of Supervisors, stated in April 2015, “Mono County had a choice when the proposed listing [of the Bi-State sage-grouse] was issued: Commit to the conservation effort based on the understanding that the sage-grouse should not be listed for scientifically verifiable reasons, or fight the listing. Mono County chose conservation and the power of partnerships and collaboration over political grandstanding.”