By News Staff on May 9, 2018 in General Misc. Stories, Government Agencies/Utilities 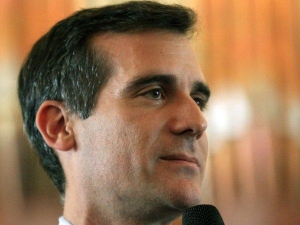 Garcetti, basically, blew the Board of Supervisors off, referring them, in the future, to the LADWP Board of Commissioners’ head Mel Levine. Mono Supervisor Fred Stump called the response “condescending.”

LADWP’s decision to not irrigate 6,000 acres of grazing leases has been postponed until the department goes through an environmental review. But, the water that will be supplied, according to Garcetti’s letter, is less than minimal.

The letter states: “Staff has indicated that the amount of water provided will likely be similar to 2016, which was also based on snowpack conditions.” Mono ranchers got 4,600 acre feet in 2016, the year before the epic snowfall/runoff. Mono County snowpack was at 71-percent of normal with an anticipated runoff of 73,000 acre feet. According to this year’s department operations plan, runoff is at 82-percent of normal with run-off anticipated to be 82,700 acre feet.

In prior years, ranchers received five acre-feet per acre for a total of 30,000 acre feet on the Long, Little Round and Round valley leases.

Mono County’s response to the May 1 Garcetti letter points out the flawed math. The water delivered amounted to 18-percent of what ranchers had received, not proportional to the actual percentage of normal runoff. According to Mono’s math, proportional water deliveries would total 23,900 acre-feet this year.

Garcetti made the mistake of referencing “returning flows to the Owens Gorge.”

Mono’s letter, signed by CAO Leslie Chapman, states “We regret to inform you that despite having three years to implement the settlement agreement, LADWP has made little progress in completing the facility improvements necessary to implement the flow regimes…. Even more frustrating, in recent discussions with plaintiffs…., LADWP has taken the position the three-year deadline is subject to interpretation and it need not comply with it.”

The County’s letter did cover Levine, as well as 33 other interested parties.

The winner of the Governor’s race is going to be whoever trump insults and hates the worst,certainly not the one he endorses. My bet,Gavin Newsome is going to be the winner.

Just think, we have a candidate for Governor that used to be the mayor of LA. I’m sure he’d be great for water in Inyo and Mono counties, not to mention the State.

If I were to see LA Mayor Eric Garcetti standing somewhere on the hill while skiing I’d run over his tips, because he deserves it. If I were to see him on a bike ride I’d ride up behind him and rub his back tire before busting an epic block… Read more »