By News Staff on September 4, 2018 in General Misc. Stories

Mammoth Lakes, CA – On Thursday morning a drone flown by a
contractor for the Los Angeles Department of Water and Power (LADWP) crashed,
sparking a fire on ranchlands that LADWP has dewatered as part of a plan to export
more water from the Eastern Sierra to the City of Los Angeles. 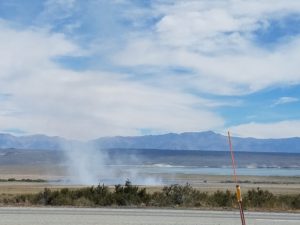 According to preliminary reports from the U.S. Bureau of Land Management’s and the
Inyo National Forest Service’s Owens Valley Interagency Communications Center, the
crash occurred at approximately 11:20 AM starting a fire near McGee Creek northwest
of Crowley Lake.

The fire continued for more than two hours, burning approximately
10 acres, before being contained at approximately 1:45 PM. As of late Thursday, the fire
was still smoldering and smoking and officials were still monitoring the area.
The drone was flying above Los Angeles-owned lands in Long Valley that have
historically been leased for ranching. According to local sources, the purpose of the
flight was to monitor the effects of LADWP’s dewatering on Bi-State Sage Grouse, a
species proposed for listing under the federal Endangered Species Act. 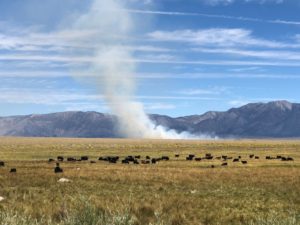 The helicopte-rstyle drone was approximately nine feet long. By early Friday, the cause of the crash remained unknown.

LADWP’s dewatering has browned and dried the landscape of southern Mono County.
Earlier this year, Secretary of the California Natural Resources Agency, John Laird,
warned LADWP that its actions and failure to perform the requisite environmental
review could cause environmental impacts, specifically explaining that LADWP’s
dewatering would “significantly increase the risk of wildfires, which would threaten
nearby communities.” Yesterday, officials from the Long Valley Fire Protection District
confirmed that the ranchlands where the fire occurred is extremely dry.

The removal of water from approximately 6,400 acres in Long Valley, which has been
irrigated for at least the past 100 years, has resulted in the drying of vegetation and
incursion of invasive plants which make the area more susceptible to ignition increase
the threat of wildfire both to adjacent communities and public lands managed by the
U.S. Bureau of Land Management. “I have lived in the Crowley Lake area since 1991,
and I have never seen a fire in that area,” said Mono County Supervisor and former Long
Valley Fire Protection District chief Fred Stump.

On August 15, Mono County filed litigation challenging the decision of the City of Los
Angeles and LADWP to alter decades of water and land management policies by
dewatering these ranchlands in Long and Little Round Valleys. The lands provide
habitat for Bi-State Sage Grouse, enhance scenic, recreational and habitat values in the
Eastern Sierra, and serve as pasturelands for agricultural operations which contribute to
the Eastern Sierra economy. The County’s lawsuit asserts that LADWP violated the
California Environmental Quality Act (CEQA) by changing its land and water
management practices without first analyzing the potential significant effects, including,
ironically, the increased threat and risk of wildfire.

For more information and maps of the affected area, a copy of the County’s lawsuit
against the City of Los Angeles and LADWP, and comments letters on the issue, please
visit: https://monocounty.ca.gov/cao/page/mono-supervisors-ask-ladwp-do-right-thing.
.