By News Staff on July 10, 2013 in Government Agencies/Utilities

Mono County – July 2th, 2013 – Mono County Board of Supervisors recently honored 4 longterm county employees and officials who are retiring. These employees have made significant contributions to the County and the public it serves. 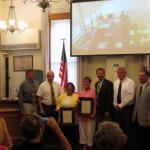 Nancy Boardman began her career with Mono County in October, 1980 and first served in the Health Department as a Senior Administrative Clerk; eventually became the Environmental Health Clerk/Animal Coordinator. She has been in charge of the Animal Control department since the 1980’s and served as the Animal Control Director. Nancy has been instrumental in adding staff to ensure safety through better patrol and response time; creating very successful low-cost  vaccination and licensing clinics; and increasing outreach programs and web pages to showcase information about Animal Control and animals available for adoption. 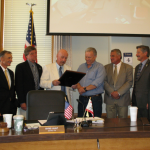 George Milovich began his career as a Agricultural Biologist in Inyo County in 1976 as a temporary employee and as a full-time, permanent employee in 1977. George became the Director of Agricultural Commissioner/Director of Weights and Measures in 1996, having served as the Deputy Director prior to that time.

The Inyo and Mono Counties’ Agricultural Commissioner’s Office (and Sealer of Weights and Measures) is entrusted with the assisting, monitoring, and advocating for the agricultural industry of the counties and its environment, providing annual reports, performing various pest-related duties, and implementing many agricultural programs including nursery and seed programs, fruit and vegetable standards, apiary inspection and crop statistics, as well as consumer protection and product quality, and verification of the accuracy of weight and measuring devices. George has seen many changes throughout his 36 years.

Clay Neely began his career with Mono County as an IT consultant in April, 1994 maintaining Fiance and Property Tax Systems and started working as a full time employee in July, 2002 as the first IT Director at Mono County. When Clay came here his laptop was one of the only PCs in Bridgeport.

Throughout the years, Clay and his staff have modernized County processes and helped the County become much more productive. Clay has been responsible for a countywide network, modern phone system, web pages, internet access, e-mail, Intranet, video conferencing, 300+ pc users, printers, plotters, 60+ servers, Central support and coordination; Elections support, GIS, and the Sheriff’s web pages, servers, PC’s and 911 support. Clay also has participated in the Digital 395 project. The County has progressed into the modern age during Clay’s tenure as IT Director

Mono County is proud to have employees stay for these long lengths of service and although these valuable members of our team will be missed, we wish them well and a happy retirement.