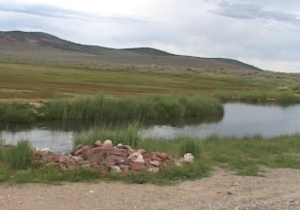 An exposed water ditch, extreme cold and snow led to a crisis at Conway Ranch and the death of thousands of trout, as we Chad reported earlier. Now, Mono County officials say they continue to pursue a DWP easement to put the ditch water in a pipeline and to look for ways to replace some of the trout.

Tim Alpers and John Frederickson lease Conway Ranch from Mono County in exchange for $30,000 worth of trout every year. Dan Lyster of Mono County Community Development said that he has been chasing DWP for several years to get an easement to install a pipeline to protect the Bell Ditch water that flows into Conway Ranch for the hatchery.

Lyster said DWP officials have indicated that they are willing to grant a five year easement. A longer period of time would require review by the Los Angeles City Council. Lyster said DWP has told him they are “close on an easement for the pipeline.”

Unfortunately, not close enough to have prevented the end of December disastrous loss of thousands of cutthroat and rainbow trout. The U.S. Fish and Wildlife Service gave Mono County the thousands of cutthroats as part of a pilot project to record growth data. Lyster said Mono will try to get more trout this spring. He will meet with Fish and Wildlife Service next week in Reno and talk about the trout.

Mono County has so far not offered to help pay for Alpers’ lost trout. Lyster said Alpers reported his loss totals something like $70,000. Mono County officials and Alpers will meet later over the Conway Ranch issues.

We work to provide daily news to all of the Eastern Sierra, in the tradition of Eastern Sierra News Service and the Sierra Wave. We bring you daily happenings, local politics, crime, government dealings and fun stuff. Please contact us.
View all posts by News Staff →
Parent supports Owens Valley School as is
Bureaucrat Beat: Bipartisan stupidity, Moon Beam no more, and perks