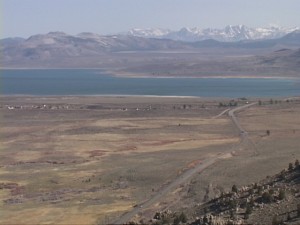 Tuesday the Los Angeles Department of Water and Power Commissioners approved a proposed agreement with the Mono Lake Committee, CalTrout and California Fish and Wildlife for restoration work on Mono Basin streams. You can check out the Mono Lake Committee’s comments at www.monolake.org. Below is the press release from LADWP.

LADWP ENTERS INTO HISTORIC AGREEMENT CREATING PARTNERSHIP TO PROTECT MONO BASIN STREAMS Partnership with the Mono Lake Committee, CalTrout and the California Department of Fish and Wildlife Establishes a Permanent Framework for Mono Basin Environmental Protection
[Los Angeles CA, August 27, 2013]—The Board of the Los Angeles Department of Water and Power (LADWP) today ratified an agreement creating an historic partnership to protect the Mono Basin environment and the four major streams that flow into Mono Lake. Together with the Mono Lake Committee, California Trout, and the California Department of Fish and Wildlife, LADWP will implement the recommendations of a state-appointed scientific panel, which has completed a 12-year study on how best to protect the fisheries of Rush, Lee Vining, Parker, and Walker creeks and meet the State’s public trust doctrine obligations.

“This new partnership agreement accommodates the concerns of the Mono Lake stakeholders in a manner that is respectful of the concerns of LADWP’s water customers for reliable and affordable water while providing certainty for all parties in the future,” said Ron Nichols, LADWP General Manager. “We all look forward to what will be a new era of cooperation and a bright future for the four Eastern Sierra streams that flow into Mono Lake.”

“This innovative new partnership demonstrates the potential for the Los Angeles Aqueduct in its second century to operate in an environmentally responsible manner at Mono Lake while reliably delivering water to Los Angeles,” said Mono Lake Committee Executive Director Geoffrey McQuilkin. The key elements of the partnership include:

 LADWP’s agreement to construct modifications to the spillway at Grant Lake Dam, which will allow higher water flows in to Rush Creek, the largest tributary to Mono Lake. The new, modified Grant Dam spillway will assist the movement of sediment, create deep pools for trout, and accelerate stream habitat quality.

 The annual supply of water to Los Angeles from the Mono Basin will be maintained at current levels as a result of a new set of ecologically beneficial flow releases that the members of the partnership have agreed to implement.

 The partners have also agreed to a one-time allowance that will permit the export, over time, of 12,000 acre-feet of water to Los Angeles, which will allow L.A. water ratepayers to make up approximately half of the cost of the spillway improvements at Grant Lake dam.

 LADWP has also agreed to fund a Team, governed by all four partners, which will oversee continuous scientific study of Mono Lake and Mono Basin stream conditions.

 LADWP and its water customers will receive a series of legal and regulatory assurances that will give LADWP the certainty that it needs to conduct its water and power operations in Mono Basin, including the partners’ opinions that this project protects the public trust values and the fishery.

The new partnership agreement is the result of three years of collaborative discussions and negotiations between the parties to resolve all outstanding issues necessary to ensure the lasting restoration of the streams feeding Mono Lake and the lake itself. Mark Drew, California Trout’s Eastern Sierra Regional Manager, said “This settlement brings to closure a long and arduous process and illustrates how, when committed individuals work together and use science and sound policy strategies to solve complex problems, successful negotiations can be realized.”

The partnership agreement will now be forwarded to the State Water Resources Control Board for approval and inclusion in an amended water diversion license to Los Angeles.