By News Staff on May 7, 2014 in Government Agencies/Utilities 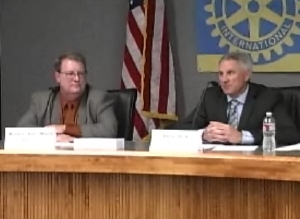 The work of a County Assessor may seem inscrutable to most voters, but it is a process that involves the values of peoples’ homes and property and drives the collection of taxes. Assessor Bob Musil and his opponent Barry Beck answered questions at the recent Noon Rotary Club Candidates Forum in Mammoth Lakes.

Beck said he wants to create a smaller, more efficient department and quit spending thousands on outside experts. Beck has worked in the Assessor’s Office for 11 years and has an Advanced Appraisal certificate. Musil said he was appointed as Assessor last September and has brought stability to an office that has had six department heads in nine years. He worked as assistant assessor since 2006 and said since his appointment, he has overseen data entry into the property tax system, drastically reduced the back log of appeals and has reviewed property values.

Asked to describe their management styles, Beck said he uses collaboration. He said, “I don’t know everything, but I do have a 24-point plan ready to implement.” He said he has ideas from a number of staff members. Musil said he is leading the department and considers himself very approachable. He said he lets the team know he will listen and lets them know what to expect.

Is the current structure and staffing appropriate? Musil said yes. He said Mono County took a hit with real estate in 2009 which caused a reduction in the 14 person staff which is now down to 9 with a temporary worker. Beck questioned the staffing. He said he would “look at the way they are doing things.” He said there is “million dollar software not being used.” He acknowledged that the County is hurting financially and that other counties’ appraisers individually handle thousands more properties than Mono County’s.

How would they increase efficiency? Beck said there is a module in the software that would allow direct enrollment. He said he would automate the processes. Musil also said he would use software more fully. He said he had instructed staff to start entering data into the system. He also objected to his opponent comparing Mono County appraisers with those in very large counties.

Was hiring outside consultants to evaluate Mammoth Mountain and Casa Diablo geothermal appropriate or not? Musil said he absolutely believes they are appropriate. He said these are the two most valuable properties in Mono County. He said Mammoth Mountain pays $2 million in property taxes. He said it’s valuable if there is an appeal.

Beck said it was appropriate at some point. He said the consultant contract not to exceed $100,000 has been going on year after year. Said Beck, “It’s time for the Assessor to take responsibility. Put a value on and defend it.” He said Mammoth Mountain has been assessed for 50 years. “We should know how to do it,” said Beck.  He said Casa Diablo’s valuation is “formulaic”.

Both men agreed residential appeals have been mostly resolved. What would they change? Musil said he has already handled assessment appeals but would like to see more automation. Beck said the number one thing is customer service and public perception. He would be pleasant and helpful and make more available online.