By News Staff on February 14, 2012 in Government Agencies/Utilities 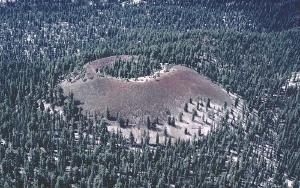 USGS photo of one of the red cones south of Mammoth Lakes in Long Valley.

Back in the 80s, the volcano scare in the Mammoth Lakes area made big news and put locals on edge.  Since then, the U.S. Geological Survey has monitored Long Valley for any volcanic and earthquake activity.  Now, USGS has established their California Volcano Observatory at existing facilities to increase “awareness of and resiliency to the volcano threats in California.” The new facility consolidates monitoring of all volcanic threats in the state.

The seriousness of these threats lies with geologic speculation and analysis.  USGS Director Marcia McNutt said in a press release that the consolidated observation of all of California’s potential volcanoes will help with monitoring and early warning and connections with emergency managers.  This new facility does replace the former Long Valley Observatory established in 1982 to monitor the then restless Long Valley Caldera and Mono-Inyo Craters region near Mammoth Lakes.

Leslie Gordon of USGS assured Sierra Wave that this new facility in no way reduces in monitoring observation of Mammoth Lakes and Long Valley.  The same people will continue to monitor from Menlo Park.  Gordon said that Instrumentation in the ground near Mammoth Lakes remotely transmits and monitors digitally activity here and sends information to USGS.