By News Staff on May 3, 2012 in Government Agencies/Utilities 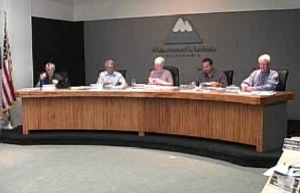 The Mammoth Town Council’s attempt at its own stated goal of “discussions of Town finances and the MLLA $43 million judgment” unwound as a kind of re-run of a previous meeting with very little public input.

Town Manager Dave Wilbrecht said there is a “rigorous process” happening with restructuring the Town finances and  mediation with creditors would start soon.  That was nothing new, and details were not revealed. Then, he turned over the discussion to 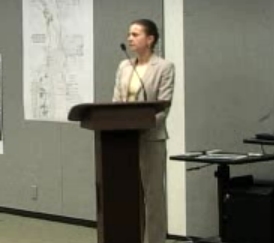 Assistant Town Manager Marianna Marysheva-Martinez.  She virtually repeated what she had said at the last Town Council meeting about low general fund revenues and high costs and how Mammoth’s government is already bare bones.  She actually said, “There’s no place to cut.”  Some observers wondered out loud how the Town could afford to renew Martinez’s contract at $4,000 a week.  She herself had said in mid-April that the Town “could not afford the luxury of an Assistant Town Manager.”

Martinez went on to describe the Town’s tale of woes – no money to maintain roads and other facilities, no money to build facilities and amenities, not enough employees to get work done. She said the general fund sits at $19 million with other funding sources bringing in another $15 million from gas taxes, state and federal funds and local tax measures.  She said to make up next year’s $3 million shortfall could require a 14% across the board cut.

Martinez made the vague statement that consultants will present a “holistic approach to balancing the budget and leaving money for MLLA” next Tuesday. She said that the Town’s consultants will appear at a May 8th meeting to talk about cash flow projections, a balancing plan and long term forecasts.

The Assistant Town Manager continued to call Mammoth’s money situation one of “magnitude.”   When asked for public input, only John Morris, Chair of the Mammoth Lakes Lodging Association stood up to support the “power of tourism.”  He argued for continuing to spend money on marketing.

With that, the Council members said nothing and adjourned to another meeting next Tuesday, May 8th at 6pm in Suite Z where supposedly more information will become available.

After this week’s meeting, citizens wondered what the Town will do when June 30th arrives.  That’s the court-ordered deadline for the Town to pay up the whole $43 million debt to MLLA, a company that has expressed no interest in mediation or negotiation recently.

We remain the Greece of the Eastern Sierras. Ritsita anyone?

Since the CEO of Mammoth Mountain (who started the whole airport mess) runs the entire town, let him pay the $4,000 per week salary, plus home, plus car, plus retirement, plus …

He can afford it more than the town can.

For those that attend these meetings,I got a question…..Is MMM as cute in person as she seems to be in the photos,or in the Sierra-Wave videos that occasionally get posted?

I have given up on the town and all the over paid people who work there. The Dream is over guys get a clue. The team I am on has nothing to do with the town but we have brought thousands of people to Mammoth over the years. What do… Read more »

When is the last time you saw a Public employee get fired ?

Good luck with that.

However I do agree.

What the ...?
Reply to  upthecreek

There is a public employee that got fired recently in Bridgeport for violence on the job. – But his union (the worst thing California ever invented – unions for public employees) is dragging his case out … forever. At taxpayers expense. But the bigger problem is with our elected officials.… Read more »

……And yet Caltrans offered to give the TOML Highway 203 and $15 million 10 years ago and they refused…..I wonder if it’s time to reconsider that offer?

If you think the airport is a disaster — there would be no words to describe the apocalypse that owning 203 would bring the town. All the big carpet baggers in the World would descend on Mammoth to get their piece of 203 for their own profit. There would be… Read more »

Bwaaa, the airport mess might as well have started when the county “gave” the town the airport…..I wonder if it’s time to reconsider that offer?

Too often people in charge seem to enjoy listening to themselves talk when there needs to be less talk more action.

Please don’t forget that those in charge are also the ones that rarely, if ever, lose jobs regardless of poor performance – example: the negotiating prowess currently demonstrated by 3M and the reward given for the poor performance….where are the positive results of all the professional expertise paid for at… Read more »

So the marketers, the police, upper management, all want to retain their piece of the PowerPoint pie. It’s time for a new pie chart, with MLLA getting its 20%, the general fund pie the same size as the revenue pie, and future expenditure pies no larger than future revenue pies.… Read more »

It would be nice if the press would ask: When June 30 comes on goes and TOML has not paid the $43M, what happens? Can MLLA stroll down to the Sheriff with court writ in hand and have the LEOs enforce it by, e.g., seizing TOML assets? Or would/must TOML… Read more »