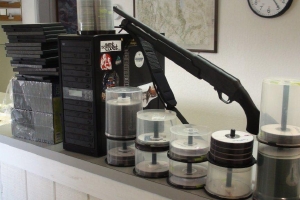 hundreds of pirated DVD movies. The other case deals with methamphetamine.

According to the Mono Sheriff’s Department, narcotics agents served a search warrant in June Lake and as a result the two people at the residence now face charges related to pirated DVD movies and duplication equipment.

Officers said that Nicholas Dunahoo, 28 and Kimberly Maddox, 25, both of June Lake, were arrested and charged with manufacturing, copying, selling and/ or renting pirated DVD movies. Agents said the pair possessed several hundred pirated DVD movies, duplication equipment and evidence of the illegal enterprise. Agents also said they recovered a shotgun from the home. Dunahoo also faces an outstanding felony warrant from another county.

In another case, MONET agents arrested a Fresno resident who they allege is linked to a Fresno organization that has “delivered narcotics to Mammoth Lakes in the past.” Agents arrested Sergio Pena Cabrera, 24 of Fresno. He faces charges of possession for sale and sales of methamphetamine. Agents booked Cabrera at the Mono County Jail. He also faces an immigration hold by Immigration and Customs Enforcement as an illegal immigrant.

We work to provide daily news to all of the Eastern Sierra, in the tradition of Eastern Sierra News Service and the Sierra Wave. We bring you daily happenings, local politics, crime, government dealings and fun stuff. Please contact us.
View all posts by News Staff →
Bureaucrat Beat: Come together, scary shadows, and monopolies
Mono deputies arrest Grass Valley man on drug charges