The following press release was issued by the Mono County Sheriff’s Department: 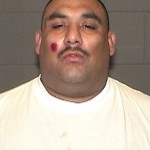 MONET agents arranged to purchase methamphetamine from Hector Pacheco, Jr., age 34, of Ontario, CA. Mr. Pacheco met with the undercover agents and completed the transaction sale. As the transaction was completed, an arrest team attempted to take him into custody. Mr. Pacheco got into his vehicle and rapidly accelerated away nearly striking a member of the arrest team. As Mr. Pacheco fled the scene, he struck a Mono County Sheriff’s patrol unit that was attempting to stop him. He fled at a high rate of speed down Old Mammoth Road failing to stop at two controlled intersections.

Mr. Pacheco continued to flee outside of the Town of Mammoth Lakes traveling southbound on to Hwy 203 and onto Hwy 395 at speeds in excess of 100 miles per hour. Law enforcement officers pursued him from Mammoth Lakes to just outside of Bishop. His vehicle was stopped by law enforcement officers using the PIT maneuver (a pursuit tactic used to force a fleeing vehicle to stop). Mr. Pacheco was arrested without further incident and transported to the Mono County Jail in Bridgeport. As a result of the arrest, MONET agents seized a ½ pound of methamphetamine. Mr. Pacheco is currently in custody at the Mono County Jail facing charges of felony evading, assault with a deadly weapon, and transportation and sales of narcotics.

MONET would like to thank all the agencies that assisted with this case. It was a successful team effort.

Brown pride .. I hear what you’re saying, the truth should never hurt, it should set one free though .. Yes the truth convicts. So as for your final comment .. “all of you evil people” you are out of line, you as a Christian can not say such things… Read more »

“typical of one of my fellow hispanics…”
typical?
fellow hipanics?
Methinks “fellow hispanic” Ferdinand Lopez” just may be in disguise.

I left a reply on digo’s comment, I guess the truth hurts.. As I posted before, to all you evil people who posted they should have put Hector down should really go to church and ask God for forgiveness so the devil can come out your evil life. With that… Read more »

Hats off to the officer that applied the PIT maneuver!! Good Job!! There is plenty more nasty illicit drugs out there in our valley. Our communitys are too small and tight, for these city mentallitys to come and push there evils on our communitys, without most of us noticing. All… Read more »

Good job MONET, and all the other agencies. Another scumbag off the streets… Look people, it’s really easy to armchair quarterback when a crime is going down – nobody got hurt and we can always play the woulda, coulda, shoulda game – life is dangerous sometimes. Dingo you have a… Read more »

Another low life peddling his chemicals in our eastside communities.

Oh, so that’s why the CHP car flew by me at a very unsafe 100 mph…I was slowing in the number 1 lane to turn at the green church and there was a slow moving vehicle in the number 2 lane…this CHP car squeezed by as I slowly merged into… Read more »

Yes you’re right sierragrl, in a situation such as that, the officer should have taken a few seconds to slow enough to make it safe for everyone, but the adrenaline is pumping and things get forgotten. a lot of times such as this, the officer in your situation was racing… Read more »

Wayne plenty of material here to get you posting.

This is exactly the type of criminal MONET and INET should be arresting. Good job ya’ll.

Good job to get this dope dealer off the streets….but I got to agree with Dingo…if in fact this guy was allowed to get back into his vehicle…The story says when he jumped into his vehicle to flee,he nearly hit an arresting officer….For that reason alone,who would have blamed the… Read more »

Wayne, it might have been, that they didn’t open fire .. because of the danger of stray rounds? Maybe they showed constraint there … it might have been that there were by standers around .. in light of the shooting at the Empire State building in NYC .. all of… Read more »

The need to add the charge of being STUPID.

You got that right Rob! The chief probably would if he could.

MONET should be thanking the man upstairs that nobody was killed or injured by this idiot as he was fleeing the police. I hope MONET learns from this, he should have never been given the opportunity to get back into his car, it doesn’t appear he can run very fast… Read more »

Dingo, neither you nor I were there…things never go as planned. You can’t quarterback the arrest and how it went…you weren’t involved.