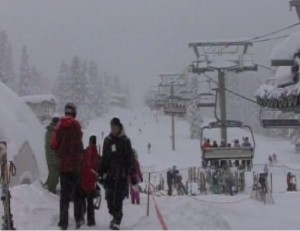 Mountain through the Fourth of July. The Mountain made that news official today. With 606 inches of snow this season, it’s a record. The most snow Mammoth Mountain has received in a single season.

With 15 to 25 feet of packed snow, Mammoth has also earned the recognition of having one of the highest recorded base depths of any ski resort in the world, according to skiinfo.com.

Even in years of less snow, Mammoth has kept the slopes open through July Fourth. In fact, that has been the story in four out of the last seven seasons. Skier numbers have topped one million and the late closing date will push the numbers even higher.

And, speaking of a million, the Third Annual Mammoth Invitational event kicks off Friday through Sunday at Mammoth Mountain which will benefit the Mammoth Mountain Community Foundation’s goal to raise $1 million per year to benefit public schools and assist the Mammoth School District to improve academic programs. That’s what Austin Beutner, President and Chairman of the foundation, said. By the way, Beutner is also Deputy Mayor of the City of Los Angeles.

The Invitational is the premier ski fundraising event of the season. The event includes hundreds of elite skiers, U.S. Ski and Snowboard Team members, Olympic athletes, X Games medalists, parents, kids and celebrities like Olympians Stacey Cook and Greg Bretz and X Games athlete John Teller and many others.

MMSA CEO Rusty Gregory, who is also a Mammoth Mountain Community Foundation board member, said the Mammoth Invitation is one of many ways Mammoth “is adjusting to this period of recession and declining state resources.” Gregory counted as “incredibly fortunate” that Austin Beutner, with fiscal experience, heads up the foundation with support from many LA visitors to help raise funds for education.

We work to provide daily news to all of the Eastern Sierra, in the tradition of Eastern Sierra News Service and the Sierra Wave. We bring you daily happenings, local politics, crime, government dealings and fun stuff. Please contact us.
View all posts by News Staff →
Former clerk underscores importance of trees
Mammoth Ambassadors of the Week