By News Staff on March 1, 2012 in Government Agencies/Utilities 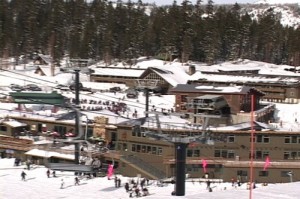 21 years ago, Mammoth Mountain went through what was called Black Monday – the layoff of 150 employees after a series of droughts.  This year, the layoff number was half that but the agony just as bad.  Mammoth Mountain CEO Rusty Gregory said that the regional drought and low skier demand led to “draconian and severe reactions.”

The CEO explained that every few years the Eastern Sierra suffers drought.  Contingency plans for drought, he said, get more severe the more severe the drought is.  This year, he said, it was a national phenomenon and the perception of virtually no winter hurt the ski industry across the nation.  As of Wednesday, he said. skier visits were down 33% and revenues by 29%.

Wednesday’s layoff included 75 year-round employees with an average longevity of 10 years.  Two vice presidents were in the group of lost jobs.  One had worked at the Mountain for over 40 years.  Gregory said the Mountain faced a drop off of $40 to $45 million in revenues – not enough, he said, to stay in business.   The CEO said, “We re-did our priorities which were to keep the doors open and maintain a great guest experience.”  Those whose jobs were not directly related to the on mountain experience were listed for layoff.

Gregory said, “These were 75 year-round employees that we normally need.  We don’t have the money to pay them.” He added that everyone who was laid off was in good standing.  He said he hopes he can re-hire them, but not until the Mountain is financially able.  Among those who lost jobs were workers in accounting, supervisory positions, maintenance, mechanics, equipment operators, information technicians.  Some were in management, others were not.  Gregory repeated that you “can’t take $40 to $45 million out of an annual $150 million budget and wait to go broke.”

Earlier in the winter, Gregory had cut expenses and finally cut hours and pay.  He said President’s Holiday looked good, but it wasn’t enough.  Gregory met with top management in several day long meetings.  He said they looked at what jobs to eliminate or consolidate.  Labor takes up 50% of the annual $150 million in revenue, according to Gregory.  Officials decided to reduce the cost of employees in the amount of the revenue reduction.

Gregory did agree to some severance and to health insurance for employees and their families for a period of time related to years of service. Year round, Mammoth Mountain employed 359 people.  The layoff of 75 amounts to 20.8% of the workforce there, according to Gregory.

How will the Mountain deal with maintenance and the “fix-it” time of year  during spring and summer?  Gregory said, “We’ll get to it when we get to it.” He repeated that the priority is to keep the Mountain open as a good experience for guests.

After Rusty and his executives put together a plan, top management, mostly, delivered the bad news to workers on Wednesday.  As of Thursday, the layoffs were still underway.  Going forward, Gregory said, “I hope to re-hire.  In the past, a significant number have been brought back at the same pay and level of benefits, but,” he said, “it certainly will not be until winter.”

Many memories of that day,remember the time ,come spring,everyone that lived there went on unemployment benifits,no work at all,in the summer,good times huh,i was a patrolman luckly working,shoveling snow into toboggans from the trees to a run ,pack it out then a skier would take it off ,oh well do… Read more »

Dave is 90+, his kids were not interested in the Mountain (remember they sued him). What do you think if they inherited the Mountain? They would fight like cats and dogs for their share, not of the Mountain but sales price and individual profit. I believe that Dave did the… Read more »

whoisreallytoblame If you believe that we should throw you in jail with Rusty the rip off man.

So funny how Rusty has fooled all if you suck ups over the years. Next time I see hime drive by I am going to throw an egg at his car.

Oh Jake, why is that? Follow the money. Bottom line is nobody forced Dave out. He sold the company off for as much money as he possibly could at the height of the market leaving the Ski Area in a huge debt. Like it or not, that’s the truth. I’m… Read more »

I find it hard to believe you were actually educated by our school system? Or maybe that is the problem! Sad………

I’m a firm believer that when Dave owned the mountain he could sell it in any manner he saw fit.

Who is anyone to say what he should or shouldn’t have done.

Yep Rob, I didn’t quite understand that twist on this story, except that it could have been to try to take the heat off of Rusty, not even a good try though.

Why does everybody blame Rusty? Why not who really benefited in this whole deal.. Simply follow the money. Dave McCoy “The Legend”. He was already wealthier then any of us will ever be. In his golden age when he had more then enough money to last him and his family… Read more »

Oh Look at all this hate. It’s easy to hate Barry Sternlich and big companies and Rusty but don’t dare say anything about Dave! I’m not saying he was malicious, but the facts are the facts. He didn’t give the company to his family, take it public, or sell it… Read more »

@whoisreallytoblame –
What a great example of some body who really does not know what they are talking about. Get back out there and do some research. If you had half a clue it might have shown.

Oh? What’s 1 point that I am incorrect on? Due tell.

It hardly seems worth the effort to inform you, seeing that you seem to know it all anyways. But I’ll try. You are correct that Dave really did not have sell when he did. But he decided it was time to go. The Golden Era was over. Rusty had tainted… Read more »

Won’t let me reply to you. So read up. I never said Dave was supposed to sell it back. I said it would be the noble thing to do. Clearly you read as well as you make up stories. Yes Dave sold @ the peak of the market and profited… Read more »

So it looks like it is TRUE..
MMSA is run by the Banksters.

The mountain is still to top heavy. What about the department heads who are collecting full time wages and putting in less than half their work hours. Are they now going to pick up the load of their staff that has been let go? I seriously doubt it. They will… Read more »

Top Ten Reasons Mountain Mountain and town are now failing. 10. The vision for both entities are based on the greed factors instead of the need factors. 9. The business community is ripping off the town coffers by under reporting sales income by the millions. 8. The tax base funds… Read more »

blame the weather if you want, i blame over priced ticket sales and higher food cost. oh, and poor management. mammoth used to be a winter destination everyone would want to visit, now most people dont want to go for their own reasons. thru the years, new buildings and remodeled… Read more »

For more info, here is Rusty Gregory’s post on the Mammoth Forum: Re: MMSA CEO cuts pay and expenses as skier visits drop by rusty » Thu Mar 01, 2012 5:23 pm Hi guys, Yesterday was an awful day. Instead of trying to answer your specific questions or comment on… Read more »

Come on Rusty, have you bought a lift ticket at Mammoth, eaten and drank on the Mountain. WAY OVERPRICED buddy so like econ 101, nobody is buying. Most people don’t have salaries like you do and most of my buddies don’t either. I have one request and I do hope… Read more »

Explain all you want Rusty. I do not think your words are worth much. “21 years ago, Mammoth Mountain went through what was called Black Monday – the layoff of 150 employees after a series of droughts.” So after just half a season of a slow snow year, on the… Read more »

enoughalready – wow that was one mean & nasty post. Rusty has always been a gentleman to me. Sometimes I think he’s damned if he does, and damned if he doesn’t. I know for a fact he’s always in the crosshairs. Times have changed a lot since Dave, it’s a… Read more »

Hard times. My heart goes out to all of the families.

I don’t think the drought has anything to do with it.. I think this was just an excuse to do something that corporate wanted to do for years. Clean house. Sad for the poor sheeple that got the BOOT How is the weather in Balboa??? Rusty MM is out of… Read more »

Of course the drought had A LOT to do with it! Are you serious? Not that I don’t agree with your point about corporate fueled greed wanting to downsize… they always look for an opportunity to downsize to maximize profit. The big issue is what they do with profits during… Read more »

Can I ask you a question Rusty”?  How many in the layoffs were SENIOR MANAGEMENT MEMBERS, you know the ones that make the most on the Mountain???  How about all that money you spent/wasted on the Marketing Department, especially  Howard Pickett the one you wrote an email essay describing how… Read more »

2 VPs were laid off, which is about the same ratio of regular employees. (20%)

oh and read the articles and posts bro. Hours were cut down first for seasonals, then for hourly full time employees then 10% pay cuts across the board. Why would JR get laid off? He is responsible for building all the parks which would be a huge loss if we… Read more »