MAMMOTH MOUNTAIN, CA — At approximately 10:15AM on March 3, 2018, Mammoth Mountain Ski Patrol was performing routine avalanche mitigation work in a closed area when a large avalanche released on the Climax ski run.

The avalanche traveled down Upper Dry Creek and terminated at the bottom lift terminal of High Five Express [Chair 5].

The powder cloud from the avalanche extended about 100 meters into an area open to the public, where two guests were partially caught. Both were able to immediately free themselves without serious injury.

Additionally, six employees working at the bottom of the closed lift were partially caught, but freed themselves quickly, suffering only minor injuries.

Ski Patrol was on scene with initial rescue efforts within moments, and search operations began immediately. Ski Patrol led a 6-hour search, which included the use of transceivers, RECCO, avalanche rescue dogs, and a manual probe search, all with no results reported.

Within minutes of the call, Mammoth initiated its emergency response protocols, and multiple agencies and resources responded.

We are not aware of any missing persons. If members of the public are aware of missing friends or family, please call 760-934-0611.

A full investigation is underway.

Mammoth Mountain Ski Area has been closed today due to an avalanche.

There were no missing people at last report. 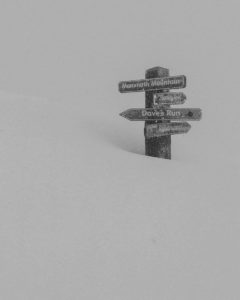 Early in the morning, the Mammoth Mountain Twitter account reported “over 3-5 feet of new snow and it is still absolutely dumping.”

“At approximately 10:15AM on March 3, 2018, Mammoth Mountain Ski Patrol was performing avalanche hazard mitigation work when an avalanche released on the upper part of the mountain traveling towards the High Five Express [Chair 5] area.

“All rescue measures are in place and the mountain is currently closed. At this time, there are no confirmed missing people. If members of the public are aware of missing friends or family, please contact 760.934.0611. More information to follow.

11:50AM – Avalanche protocols were initiated immediately. The first searches with transceivers, avalanche dogs and a RECCO search have not produced any results. The third stage of the avalanche protocol involving a manual probe search is underway.

Three individuals were partially buried in the avalanche and were able to free themselves.

Lift operations at Mammoth will be halted for the remainder of the day to focus full efforts on the site.

There have been no reports of missing persons. If members of the public are aware of missing friends or family, please call 760-934-0611.

We expect to return to normal operation tomorrow. Full investigation is ongoing and more details will come.

As of 2:04, the Main Lodge road is now open in both directions.

Good job to all involved in the search efforts!