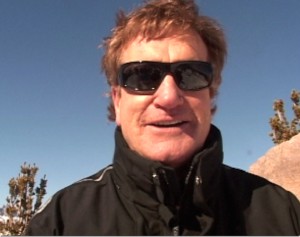 Mammoth Mountain CEO Rusty Gregory says the Ski Area will give guests more than they expect in this so-far dry year.

With just two inches of snow in December and lots of snow-making, Mammoth Mountain Ski Area holds its own with what CEO Rusty Gregory called “its most successful Christmas and New Year holiday period in my 34 years on the mountain.”  On January 1st, Gregory issued a memo to all employees (see memo after story) to thank them for hard work, to give them some good news and to tell them that the Mountain will continue to “give our guests more than they expect” in spite of dry conditions.

While Mammoth struggles under virtually no snow, snow-making and some natural snow made it possible to offer more action than Tahoe which opened only a small fraction of the terrain and services Mammoth offers.  Gregory said that many holiday guests came from Northern California for the first time due to Tahoe’s limitations.  The CEO also said a significant number chose Mammoth over their usual longer trips to Colorado and Utah.

With the holidays over and warm temperatures and clear skies, Gregory told employees that he knows they wonder how the company will deal with the “less than optimistic outlook going forward.”  In his memo, Gregory says this winter is so far the driest on record since the 1800s.  He says he has talked to heads of other major resorts, and each will cut back on lifts, terrain and staff.  Gregory says he will do the opposite at Mammoth.  He vows not to cut services, to keep everything open and to keep employees.

Gregory says if temperatures allow, he will add more runs and lifts.  He will keep seasonal and year-round employees. He points to his 34 years on the Mountain and several severe drought years which did finally see snow by mid-January.  If problems do persist, Gregory wrote that if hours of work get too thin for some, “we will feed each of them every night to make it possible for them to stay in town.”  Bottom line, as Gregory puts it, Mammoth will give the guests way more than they expect and way more than the competition.  He ends his memo with an invitation for employees to come talk to him if they have questions.

January 1 memo from Gregory to employees:

The company has completed its most successful Christmas and New Year holiday period in my 34 years on the mountain.  Never in our history have we hosted so many guests with so little natural snow and produced such a high quality experience on and off the mountain.

I had the opportunity to talk to scores of guests over the last 2 weeks.  They were universally effusive about how much fun they were having and couldn’t believe that Mammoth had top to bottom skiing, the Unbound pipe and parks were going off, June was open, Woolly’s Adventure Summit had snow for the tubers, and that we even had cross country skiing up to Minaret Summit.  They were wowed by the fireworks at Night of Lights and on New Year’s Eve, and had a blast at the concerts and DJ events.  The Village rocked and they loved that we opened a day care and brought Sushi Rei back.

Many of our guests came to Mammoth from Northern California for the first time because the Tahoe resorts’ lower elevation and limited snowmaking capabilities only allowed the operation of a small fraction of the terrain and services Mammoth provided.  A significant number chose Mammoth over their usual winter vacation spots in Colorado and Utah.  You all worked very hard and performed wonderfully.  From the bottom of my heart and on behalf of our guests and a grateful community, thank you very, very much.

But now, the crowds are returning home, the temperatures are warming and the weather is forecast to provide more sun than snow in the days to come.  I know that all of you are wondering how the company intends to deal with the less than optimistic outlook going forward.

Here is what I know:

So far, this winter is the driest on record since the 1800s.   I’ve talked to the heads of major resorts in California, Utah and Colorado.  Each of them are cutting back on lifts, terrain and staffing to save money.  Many think that the winter of 2011-12 will never really get started and the weeks and months to come will just bring more of the same.

Here is what I believe:

We operate the best mountain in the country and we run it better than our friends at other resorts run theirs.  Skiers want to ski and boarders want to ride.  This yearning and the demand it produces doesn’t go away just because Mother Nature isn’t cooperative.  Mammoth is the skier and rider’s mountain.  When it snows, they will come.  In my 34 years on the mountain, I’ve seen several severe drought years with little or no snow in October, November or December.  It snowed by mid January in each of those years.

Here is what we are going to do:

We are going to do the opposite of what other resorts are doing.  We are not going to cut services or service to save money.  We are going to keep everything open – Eagle, Canyon, the Village, all the current lifts and all the terrain possible.  If temperatures allow snowmaking, we will add more runs and lifts as soon as we can, even if it’s during the middle of the week when crowds are light.  We are going to keep our seasonal employees and year-round employees.  If hours of work get too thin for some, we will feed each of them every night to make it possible for them to stay in town.  We will continue to operate all our shops and restaurants everyday on the regular winter schedule.  Our rental shops will be renting all categories of skis and boards including demos, everyday.

We are going to do just what we did over the holiday.  We are going to give our guests way more than they expect, and way more than our competition.  We will do it the Mammoth Way with big smiles, a positive vibe and the informal, authentically sincere service we are famous for.  Our guests will love us for it and they will come back.

If any of you are unclear on what I mean or what we are doing, call me or see me in my office so that I can set you straight.  I don’t want anyone to underestimate the company’s commitment to the quality of our guest’s experience or misunderstand their individual role in delivering it.

I wish each of you, your family and friends a happy, healthy and prosperous New Year.