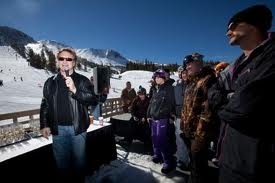 Mammoth Mountain CEO Rusty Gregory on a past opening day.

Like all business owners in a low snow year when revenues have dropped 30%, Mammoth Mountain CEO Rusty Gregory has made tough decisions – cuts in expenses and employee hours, salary cuts and a cut in his own pay. Skier visits are down 36% for this time of year, according to the CEO.

Gregory, just back from a meeting of the California Travel and Tourism Commission in Sacramento, said, “We’re making some of the difficult decisions.  Since the beginning of January, we’ve had to deal with this drought we’re facing,” he said.  Gregory has seen droughts in his 34 years at the Mountain, but he said this one is different.  It’s across the country, and he said the public perceives there is no snow recreation.  Gregory said the news frequently reports how mild the winter is and how the snow looms low.  It’s a perception, he said, that turns people away from snow recreation that they think is either not good or not there at all.  “Seeing people in bikinis in Central Park – this message has taken demand and suppressed it further,” said the CEO.

Gregory said he talks to other resorts in the West.  They have the same problem.  “Other resorts,” he said, ” have dealt with very little snow from the beginning of the season, none in January and some in February.  All are operating with significantly less snow pack and are suffering from demand suppression.”

Gregory said skier visits to Mammoth Mountain are down 36% from last year and revenue has dropped 30%. Gregory said these numbers mean 240,000 fewer visits to date.  In dollars, that means a $22 million revenue drop from this year’s budgeted plan which was based on last year – a good but not perfect year.  Gregory said the company revenue from the entire year is generally $140 million, so the $22 million drop is a big part of that.

At this point, Gregory has made no lay-offs.  He and other department heads are literally managing things day by day, watching visitor trends.  The President’s Holiday brought a big rally to visitor numbers with more than 17,000 skiers on Sunday and more than 16,000 on Saturday.  Although, those numbers typically would reach 20,000.  “That’s a major recovery,” said Gregory, “and we’re having a better week.”

Good news to some year-round hourly employees whose hours have been temporarily cut 50%.  Seasonal employees with fewer hours may not be able to afford to stay. They can apply for unemployment and make, at some point, face lay-off. It’s a daily, right now thing.

For those who have wondered out loud about who is making the decisions, Gregory said he is.  Gregory, who handles operations, owns 15% of the company.  Others, like Barry Sternlicht, are investors and partners, he said, who do not get involved with daily decisions.

The CEO added that he had already cut other expenses – supplies and materials – but not at the expense of the visitor experience, he said.  On a much larger scale, Rusty Gregory is doing what a lot of business owners are doing right now – scaling back in a low-snow year to make ends meet.

Really interesting article, thank you Benett. The ski industry is strong and will make it through this difficult season. Learning from this year should yield a focus on how resorts can diminish their dependence on weather and snow that is so out of anyone’s control. Resorts that shift focus to… Read more »

[…] Sierra Wave reporter Bennett Kessler delivers the disheartening news: “Like all business owners in a low snow year when revenues have dropped 30%, Mammoth Mountain CEO Rusty Gregory has made tough decisions – cuts in expenses and employee hours, salary cuts and a cut in his own pay. Skier… Read more »

we feel your pain