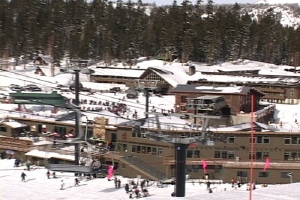 While Eastern Sierra residents consider the news this week that Mammoth Mountain has agreed to buy Bear Mountain and Snow Summit, some wondered what it would all mean to the local communities.

We posed that question to Mammoth Mountain CEO Rusty Gregory. He said, “Mammoth will have a deeper and broader position in the Southern California Market and Big Bear Mountain Resorts typically do well in drought years which provides a hedge to Mammoth’s weather risk.” Gregory said these factors increase Mammoth Mountain Ski Area’s financial strength and this stability, he said, adds to employment and economic security in our area.

In the initial press release on the acquisition, Gregory was also quoted as saying that there will be announcements in coming months about new development and expansion plans for each of the four resorts.

Urdi said, “Having sister resorts in Southern California will give Mammoth Mountain Ski Area an amazing opportunity to entice those skiers and riders to become Mammoth loyalists.” Urdi said Bear Mountain and Snow Summit will be the “local” resort, while Mammoth Mountain becomes their go-to destination resort. He said offers and special products like the Cali4nia Pass will “bring new visitors to town, staying in properties, shopping and dining in our restaurants. This is a great new opportunity,” said Urdi, “not only for Mammoth Mountain but for our community.”

The Los Angeles Times pointed to a ski area consolidation trend going on now with the need to make profits at what appears to be a time of unreliable snowfall. As Gregory said, “weather risk.” Bob Roberts, executive director of the California Ski Industry Association referred to a “climate-change market.”

Another interesting perspective is that $38 million is more that the settlement for the airport lawsuit. Remember the airport that Rusty wanted?

Thank you Ken. You got that right! People need to realize Mammoth Mountain could care less about the local economy. Pretty much like rest of corporate America!

Gangs and thugs would be leaving Mammoth with more ski/snowboarding gear than what they arrived with, without paying for most if not all of it.

Gee maybe we can get some of them up here to spend money.

biggest reason we don’t ski local at Big Bear and Summit, is SMALL hills as well as the riff raff…gangs, thugs, etc. from LA find it easy to get up there and have turf wars which we have witnessed in the past. Then there’s the traffic, which if anybody has… Read more »

“Market consolidation” is just a polite, and highly misleading, word for monopoly. Monopoly means higher prices and less output because that is the profit maximizing solution for the monopolist. The lazy business person seeks monopoly power because they make more money selling fewer products or services. It is easier for… Read more »

Movie: “Other Peoples Money” Laurance Garfield says, “A larger and larger share of a shrinking market. The last buggy whip maker made the best damn buggy whips you ever saw.” There’s some of that echoing through this purchase. There’s an on going drought. People age getting fatter every year. Now… Read more »

I’m guessing this wont mean much to those of us who do not plan to ski/ride on either one of those hills (molehills).

How will combining these ski resort bring employment to Mammoth area?

Bought and financed with the savings provided by our imposed TBID subsidy tax? Did you ask him how long before he picks the pockets of the Big Bear residents and visitors? I can’t get excited about a pass for somewhere I’d never ski. This is about as valuable as a… Read more »

Earl, perfect name. Your rather ignorant about Cabo San Lucas. My girlfriend is the top vacation club sales person in San Lucas. There are more people flying in daily from the U.S. and Canada everyday than fly into Mammoth airport per season. The massive effort bye the Mexican power Co.… Read more »

El Capitan, What does your diatribe have to do with the “value” of a Cabo time $hare or the Cali4nia Pa$$? Cabo use to be a sport fishing capital, the same way Mammoth was a fresh water fishing and winter sports Mecca. Both, have been reduced to a playground of… Read more »