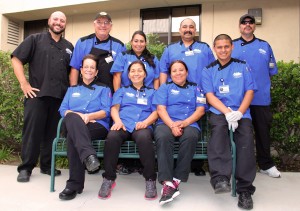 Gavriel arrived at NIH last fall and immediately began working with the existing Dietary team to make healthy and tasty changes in the hospital’s menu. Those changes included adding more recipes from scratch, making healthier selections and encouraging the Dietary team to explore their inner chefs.

As a young cook working at the Century City Hyatt, Gavriel’s mentor told him real chefs always added steps to their cooking and never took any away – words that still resonate with Gavriel today. Whether he is toasting raw garlic in olive oil for the garlic mashed potatoes; or making trés leches and strawberry shortcake from scratch, adding steps doesn’t necessarily mean Gavriel is in the back churning butter either.

Coming into the NIH kitchen, Gavriel saw the staff had the knowledge and potential to take the quality of the food to a much higher level. In order to help the staff adapt to the two additional prep hours his approach brought to the kitchen, Gavriel rolled up his sleeves and worked right beside the staff.

Based on feedback from patients and employees, Gavriel and the Dietary staff fine-tuned the menu and added new recipes. Today, it’s not unusual to see Cornish Game Hen, Shrimp Po’ Boys, or poached Salmon with Lemon Cream sauce on the menu. And while it sounds extravagant, Gavriel keeps it all within budget.

“We are now making more from scratch,” Gavriel said. “I try to encourage the crew to think: ‘What is our contribution to this recipe? Why will people remember it compared to other places they may have had it before?’ I remind them, too, we cook because we love to cook, and we want people to taste our efforts every single day.”

The hospital serves three meals a day and, on average, serves 240 people a day, including patients and their families, visitors and employees. They also provide food for NIH events – everything from cookies and fruit cups, to hors d’oeuvres and dignitary dinners.

Northern Inyo Hospital is a 25-bed, not-for-profit Critical Access Hospital located in Bishop. Accredited by The Joint Commission, NIH has been providing health care to the Eastern Sierra since 1946.