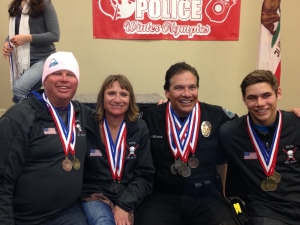 The Mammoth Mountain Ski Area hosted the California Police and Fire Winter Games from February 4 through February 7.  This is an anual competition that has been hosted by MMSA for many years in which members of the Mammoth Lakes Police Department have competed.

The MLPD’s “What’s Left” team was smaller than in past years, but still came home with the gold – and silver, and bronze.  Sergeant Eric Hugelman, Officer Andy Lehr, and Community Service Officer Kari Orr competed as skiers and Sergeant Hugelman’s son, Emmett, competed in the snowboard class.  They represented the Town of Mammoth Lakes and the MLPD admirably.  They won the following medals:

The California Police and Fire Winter Games, like the Baker to Vegas Relay Race in which the MLPD also competes, promotes physical fitness and conditioning, and camraderie among public safety professionals.

Way to go to the MLPD What’s Left Team!! Keep on keepin’ on with that team spirit despite our crippled Council.