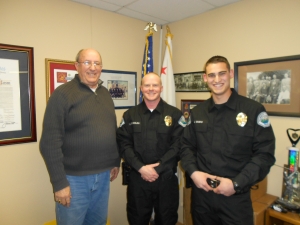 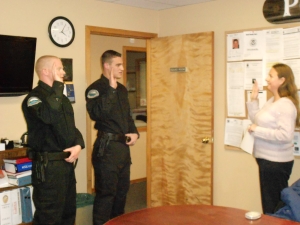 Jake Guido and Kevin Reynolds are the fifth and sixth Reserve Officers to join the MLPD in the past year.  Both of them completed Level 3 and Level 2 Academy training at Cerro Coso College.  They will be working as Level 2 Reserve Officers.  Level 2 Reserves have full peace officer power when on-duty, but only work under the direct supervision of a regular Police Officer.

Police Chief Dan Watson said, “Level 2 Reserves are a real benefit to the Police Department.  Although they cannot work alone, they make a police unit a two-man car which means only one unit is required to handle many incidents instead of sending two for officer-safety reasons.  Level 2 Reserves expand our ability to handle calls for service and deal with crime and traffic issues.”

Good job guys, when the city gets it’s (financial) act together, you 2 will be first in line for a full-time gig. Congratulations.

Just wandering, do reservist get paid and if so what do they make?

In Mammoth Lakes, Level 2 Reserve Officers are paid $23 an hour. They are required to work a minimum of 16 hours a month. Level 1 Reserves, who can work unsupervised, are paid $25 an hour.

So happy for Jake Guido, that is a great kid who will be a awesome Police Officer. Congratulations Jake!