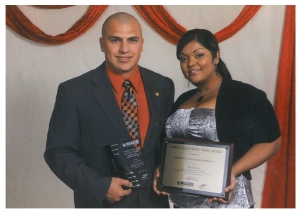 For the second year in a row, Mothers Against Drunk Drivers selected Mammoth Police Officer Art Torres to receive the award as Mammoth Lakes Police Department’s top DUI enforcer. Officer Torres and his wife Vicky recently accepted that award along with other honorees at a dinner in Sacramento.

MADD honored over 100 law enforcement professionals from around their states, and their departments, for outstanding effort in 2010 to get impaired drivers off the road and to reduce the number of drunk driving related accidents, deaths and injuries statewide. Officer Torres made 20 DUI arrests in 2010.

Mammoth Police Chief Dan Watson added that “Many people have been impacted by DUI drivers, and I believe that DUI enforcement is a major responsibility of law enforcement. Every time a DUI driver is taken off the street, lives are potentially saved. I appreciate the commitment that Officer Torres has towards keeping the streets of Mammoth Lakes safe, and I congratulate him on this accomplishment.”

Police said that according to the California Office of Traffic SAfety, DUI related fatalities decreased again in 2010, for the second straight year. OTS credits the strong enforcement effort statewide for the drop, with the goal of zero deaths.

We work to provide daily news to all of the Eastern Sierra, in the tradition of Eastern Sierra News Service and the Sierra Wave. We bring you daily happenings, local politics, crime, government dealings and fun stuff. Please contact us.
View all posts by News Staff →
Bishop Police make drug arrest
Coroner positively identifies skeletal remains from Death Valley