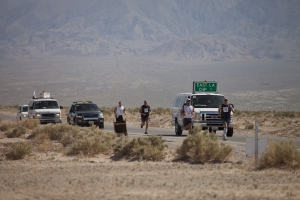 Officers of the Mammoth Lakes Police Department teamed up with deputies from Mono and Inyo and CHP officers to compete in the 27th Annual Baker-to-Vegas Relay race.

This is no small task. Temperatures ranged up to 100 degrees in the desert as 260 teams of 20 runners each ran a 120 mile relay race from outside Baker, California, through Shoshone, Pahrump, Nevada, ending at the Hilton Hotel in Las Vegas.

Chief Watson said, “This is the largest law enforcement athletic competition in the world. Literally thousands of police officers from throughout the United States and other countries converge in the Mojave Desert. I’m real proud of our guys.” The Chief pointed to the blistering temperatures and challenging course with two mountain passes.

“One third of the sworn members of the Department participated as runners and I doubt if any other police departments can match that,” said Chief Watson. he named the benefits of the event as physical fitness, camaraderie and esprit ‘d corps.

Team Eastern Sierra finished 19th out of 27 teams in the Open Category. Chief Watson said this is the most competitive of all categories with teams from large agencies like LAPD, LA Sheriff and the FBI. The local team finished in 164th place overall.

We work to provide daily news to all of the Eastern Sierra, in the tradition of Eastern Sierra News Service and the Sierra Wave. We bring you daily happenings, local politics, crime, government dealings and fun stuff. Please contact us.
View all posts by News Staff →
Inyo Water Department prepares supervisors for future
Mammoth’s Blondie on Bear Whisperer, Animal Planet