By News Staff on July 26, 2012 in Government Agencies/Utilities 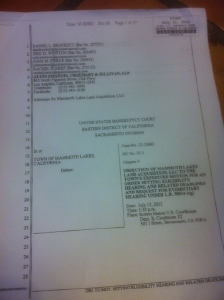 In a motion to object to Mammoth Lakes’ wish for a speedy bankrkuptcy, Mammoth Lakes Land Acquisition claims the Town lacks any emergency, failed to consider the last offer made by MLLA and failed to make a settlement offer or any payment to MLLA.

Mammoth owes MLLA $43 million,  and MLLA has begun to lay out its case against the Town’s attempt to enter bankruptcy. MLLA lawyers say that the Town has ignored MLLA’s 30-year payment plan offer and is “trying to punish MLLA for winning” the first lawsuit. The court brief says, “Municipalities are not supposed to have axes to grind.” Lawyers allege that the Town is seeking retribution and that this is at the heart of the whole case.

MLLA points to the appellate court decision against Mammoth in which the judges described Town employees’ attempts to get rid of the Hot Creek project, in breach of the development agreement.

Then the attorneys described an incident last fall. They say MLLA representatives inquired if the Town could access nearly $4.4 million from the Town’s Vehicle Replacement Fund to make an initial payment to MLLA. The brief says Town staff thought the funds were restricted, found out they weren’t and then used the nearly $4.4 million to pre-fund legal fees for two law firms and a financial advisor, among other Town costs. MLLA says, “Bluntly put, the Town played ‘keep away’ from MLLA by giving large retainers to its law firms and financial advisors.”

MLLA also claims that as a result of working with Town staff to identify available money, the two sides “reached consensus that the Town had at least nearly $5 million per year in discretionary spending that could be used to pay installments on the judgment.”

Attorneys for MLLA and Mammoth will sit down in court-ordered mediation sessions scheduled for August 6 and 7 in Southern California. MLLA will file its objections to Mammoth’s bankruptcy August 24th. So far, no date has been set for Mammoth’s bankruptcy eligibility hearing.

We work to provide daily news to all of the Eastern Sierra, in the tradition of Eastern Sierra News Service and the Sierra Wave. We bring you daily happenings, local politics, crime, government dealings and fun stuff. Please contact us.
View all posts by News Staff →
Temporary closure due to fuels reduction
Two Lancaster residents arrested in connection with a stolen vehicle
11 Comments
Newest
Oldest Most Voted
Inline Feedbacks
View all comments

How long before MLLA twigs onto the fact that if the TOML can “loan” itself money (to subsidize air service) from what were supposed to be segregated funds, it is not quite so bankrupt as thought?

The TOML can’t protect discretionary spending by filing for bankruptcy. Hopefully the federal mediator can talk some sense into them (and maybe lower MLLA’s expectations, too), and facilitate a negotiated settlement at the upcoming mediation sessions.

TOML files for bankruptcy protection but has been spending millions on what they deem appropriate over the last year. They have emergency meetings to sustain air flights at the tax payers expense. They completed a bit of trimming but not very much at that. There is no point. The town… Read more »

Surely if Balas had built his Shangrala at the airport it would have been a total loss (especially in this economy) and he would be the one filling bankruptcy not Mammoth. Rather than the town owing him anything i think Ballas owes he town a thank you and that about… Read more »

Fed Up
Reply to  MJA

Well you are correct about the Ballas project being a potential failure. But due to the complete incompetence of the town and it’s million dollar Attorneys did not argue the viability or actual revenue of the project. This was according to the Appellate courts decision.

Typical… everyone knows the town was playing games the whole time and never had any real intentions to solve this ongoing battle. Like the previous person said, they will get spanked again. Im not sure what MMM thinks playing games is going to do in the long run. ML will… Read more »

The town is allowed to spend it’s money on it’s lawyers to deal with MLLA that is a fact. Just because there was some money a few months ago does not make it enough for MLLA. They payout needs to be sustainable, appropriate and acceptable. TOML is not going to… Read more »

Ken Warner
Reply to  Fed Up

I think that TOML should just give the airport to MLLA. In fact, I’d pay them to take it away.

Ken, MLLA has already stated that they want money, not property.