This year’s fish stocking program is a touchy subject. With Fishmas less than three weeks away, how do tourist-dependent communities deal with the fact state budget cuts have whacked away half the poundage of trout dropped by the Department of Fish and Wildlife in area waters? 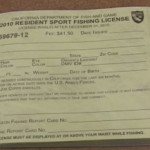 Plus, the trout included in the 375,000 pounds scheduled for the Eastern Sierra are quarter-pounders, down from the meaty half-pounders planted last year.

Jeff Simpson, Mono County Economic Development assistant, admits Mono has an advantage: more money to supplement state stocking, $130,000, all going for trophy trout in 21 county lakes and ponds. And that doesn’t count what individual marinas will be adding to the mix. The town of Mammoth Lakes will be ponying up $75,000 to stock the four lakes in the Lakes Basin. According to Simpson, Alpine County’s fish budget adds up to $50,000; Inyo’s at $20-$25,000.

“I was at the Fred Hall shows in San Diego and Lone Beach,” Simpson said. “We had a few thousand people at our booth and only a few asked about the (CDF&W) plant. What they asked about were the water levels. Our natural lakes are fine, now.” Simpson and Mono’s mantra is come soon and come often.

According to Simpson, the lakes in the June Lake loop are in good shape, Gull is only 11-inches below normal. Like Inyo’s high-altitude natural lakes, the bodies of water get the first crack at the snow melt.

As for the politics of the fish plant, Simpson said the county supervisors will deal with that at the legislative level, looking at reducing the limits and protecting breeding grounds for native fish. The emphasis here is on the “native,” since the CDF&W trout are not breeders.

So, while Simpson sees his lakes as half full of fish, Jim Tatum, chief executive officer for the City of Bishop, and Bruce Ivey, a life-long fish guru, see the lakes as half empty and are looking for a permanent fix.

“We’re attacking this in different ways,” said Tatum. Tatum admits the most time-consuming and long-term fix is convincing the state legislature to honor Assembly Bill 7’s 2.75 pounds of fish in state waters per fishing license sold. “The license fees have exceeded the total plants for the last few years,” Tatum said. In 2014, Tatum said, 1.8 million fishing licenses were sold; that totals nearly five-million pounds of trout, as opposed to the 750,000 pounds planted.

Another long-term fix would be a public/private collaboration that would take advantage of excess capacities in area hatcheries. “This isn’t a new concept,” Tatum said, and grant funding would be necessary to make it all happen. “People come here for a big fish experience,” he said. “Local agencies can supplement with trophy trout if they have the will to do so.”

According to Tatum, trophy trout cost about $5.75 a pound, about the same as a prime cut of beef.

Ivey provided some of the legislative background. AB 7 identified the 2.75 pounds per license in 2005. Then along came Senate Bill 1148 in 2012, changing the wording to “a goal of 2.75 pounds per license.” “That threw out the value of AB 7,” Ivey said. Ivey did the math: Anglers buying full-season fishing licenses in 2014, at $46.44, brought in $83 million. “The cost of fish plants is two-tenths of 1 percent of the department’s budget,” Ivey said. “They need to go back and meet the goals of AB 7. If it made sense then it should make sense now.”

Both Ivey and Tatum don’t see a huge impact on fishing tourism this year with the full impact hitting the Sierra in 2016. In the meantime, Bishop’s Chamber of Commerce and Visitors Bureau is ramping up its “Funds for Fish” campaign to drop as many trophy trout as possible in local waterways.

Drugs and schools: ‘We have to be pro-active’
Busy year for Tri-County Fairgrounds
22 Comments
Newest
Oldest Most Voted
Inline Feedbacks
View all comments

Low-Inyo…when thoughtless pricks pull that crap on me (invading my spot)…I suddenly become the worst placement caster on the planet. “Ooops…sorry. Did I cross your line…again? Looks like we’ll have to cut it”

Ya Rick, I try to stay away from those guys, unless the fish are bitting!

It’s usually the guys wearing brand new fishing vests (with the tags still attached) and using a 500 dollar bamboo pole, driving a brand new SUV, and their faces covered with zinc-oxide because they have office jobs & probably get out once or twice a year. AND they act like… Read more »

Rick;If that’a the case,I’d get a good laugh out of that…..One time I was fishing a secluded spot on Lee Vining Creek and about 3 trucks pulled up with decals of some construction company out of L.A. stopping by, with about 20 people piling out,kids running around in and out… Read more »

Rick; Are you refering to locals maybe saying something or giving you the evil eye or some SouCal tourist-fisherman thinking he’s in charge of something or someone and what not to keep or release ? I’ve never fished that area of Bridgeport,but unless it’s a “catch and release” area,fisherman have… Read more »

Try NOT releasing a decent sized trout up on the East Walker (below the dam) after you catch one in the presence of other fly-fishermen. You’ll be stoned to death if the hateful glares and sneer’s don’t get you first.

really? john, can i ask you where you are from? a felony to fish.. . animal cruelty? they are fish. a fish is not an animal. they are farm raised fish that otherwise would not exist in these waters. perhaps people who do not eat fish should not fish, but… Read more »

It was a joke. Google “women arrested for killing goldfish”.

So is football, but most of your kids play it.

The catching and releasing of fish for sport is felony animal cruelty. Take it home and eat it or don’t fish for it.

I am wondering if there will be enough water in Lone Pine creek, and Cottonwood creek to even stock trout. If you want my opinion , I think fishing is dying out in Inyo county because of the price of a fishing license. less stocking..

earl duran….Lone Pine Creek has fish right now…..smaller than usual,harder to get to,but they’re there for the patient fisherman.And isn’t that why they call it fishing and not catching ?

If the people only knew the ingredients of the fish food purchased by Fish and Game they would never eat another planted trout.

Trouble
Reply to  No Mo Fish

No Mo Fish, sort like taking your kids to McDonald’s?

B Frank
Reply to  No Mo Fish

Maybe Fish and Game can drop a net full in the Owens this month, while on there way to the all the opening day tourist sites!

Just review the problems the Conway Ranch trout fishery had. Every agency in the county fought it tooth and nail. Stop by June Lake sometime and talk to John Ferguson!

Smitty, Good points.. I have to say though the Inyo County Fish Commission is far more proactive than Mono County.(they are organizing a group to go and confront the CDFW and certain Congress folks, soon). Mono County Tourism is taking action, but the Supervisors and the Fish Commission,m are inactive… Read more »

The Inyo County Fish & Game commission is powerless and underfunded. “Organizing a group to confront the DFW” is not action. The DFW has already been confronted publicly on this, direct locally, in the press, on the radio, and nothing short of taking them to court at the state level… Read more »

All this native fish mumbo-gumbo coming from the true Fish and Game fools at Cal-Trout, is going ruin fishing in the Owens! There are no quote native trout up here! Cal-Trout is the San Francisco group that had a hostel take over of DFG a couple of years ago!

So what we’re hearing is that Mono County & the city of Mammoth Lakes are actively engaged in keeping the conversation positive with regard to area fishing in 2016 (awesome!) as well as investigating long term solutions. Inyo County and the City of Bishop however are just talking about possible… Read more »