On February 8th at approximately 11:43am search crews located missing man, Matthew Beyl, deceased on Feb. 8. Thursday’s search was part of a multiagency search that began yesterday in a remote area approximately six miles off Hwy 190 on Saline Valley Road, below the Nelson Range. 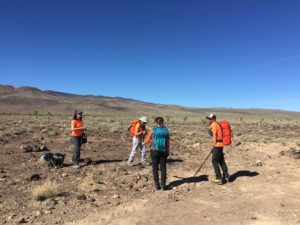 On February 6th at approximately 10:00pm  Beyl’s vehicle was located unoccupied and was reported to Inyo County Sheriff’s Dispatch by an off duty law enforcement officer who recognized the vehicle description from the BOLO. Two officers were dispatched to the vehicle and after a search of the surrounding area Beyl was not located; however, a note was left on Beyl’s vehicle instructing him to contact Inyo Sheriff. The following day (February 7th) there was a more thorough ground search, and aerial reconnaissance was requested to assist. CHP H-82 out of Apple Valley responded.

On February 8th teams from Inyo Search and Rescue, Kern County Sheriff, Inyo County Sheriff, and China Lake Mountain Rescue, as well as aerial reconnaissance from CHP H-82, and Kern County Sheriff’s Air-5 scoured the remote and rugged terrain near where Beyl’s vehicle was located. After several hours of searching Matthew Beyl’s remains were located approximately half a mile west from his vehicle. There was no evidence of foul play; all evidence at the scene indicated that Mr. Beyl died of a self-inflicted gunshot wound.

The Sheriff’s Office extends their gratitude to the men and women who assisted in this search, and we send thoughts of strength to Mr. Beyl’s family and friends during this very difficult time.

We work to provide daily news to all of the Eastern Sierra, in the tradition of Eastern Sierra News Service and the Sierra Wave. We bring you daily happenings, local politics, crime, government dealings and fun stuff. Please contact us.
View all posts by News Staff →
Helen Louise ‘Dinkey’ Boothe: 1918-2018
Big Pine’s Veterans Path may be going no where